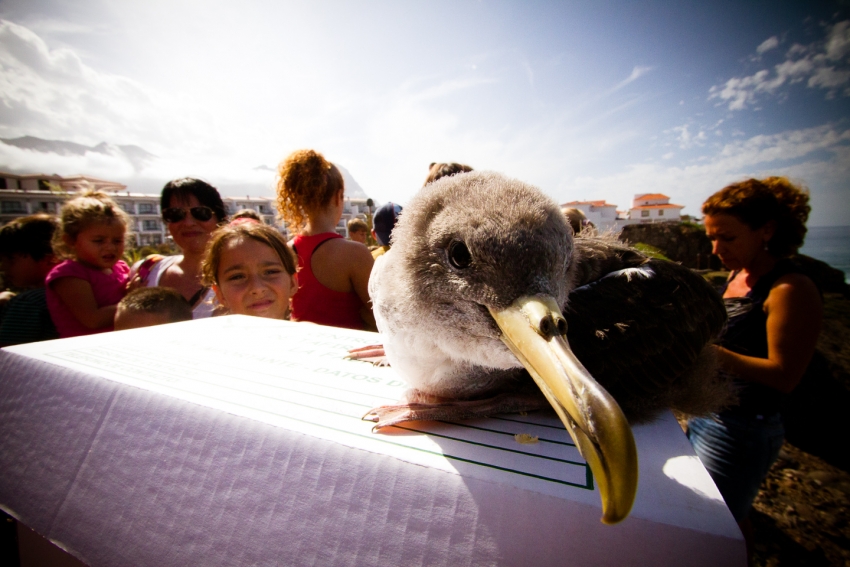 Shearwater fledgling about to be released in Gran Canaria www.photosgrancanaria.com

Gran Canaria's shearwater fledglings are about to leave their nesting burrows in the Gran Canaria highlands and fly down to the sea.

Most make it, but a few fall short or get confused by artificial lights and land in resorts and towns and along roads. The areas that see most crash landings are the north and south coasts but dazzled fledglings turn up all over the place during October and November. This year, conservationists expect the busiest rescue period to be around the New Moon on November 11.

Many of the young birds that don't make it to the ocean are run over, killed by feral cats, or starve to death so please look out for them. The good news is that 95% of the shearwaters that are found alive are successfully released back into the wild.

If you find one, please catch it with a big towel straight away as they have a habit of hiding. Take care as their beaks are razor sharp. Put your shearwater in a big cardboard box lined with ripped up newspaper, make a few air holes in the box with a pencil, then call 112 and say "tengo una pardela en mi casa". The nearest trained volunteer will come and pick it up.

Please don't try to give shearwaters food or water as contact with people just stresses them out.

Alex Says: Cory's shearwaters range widely over the Atlantic Ocean but only breed in the Canary Islands, Madeira and the Azores. Each pairs lay one egg per year in a burrow or cave in isolated areas.

For more info on Shearwaters, see this (Spanish language) website.

We have 7253 guests and no members online