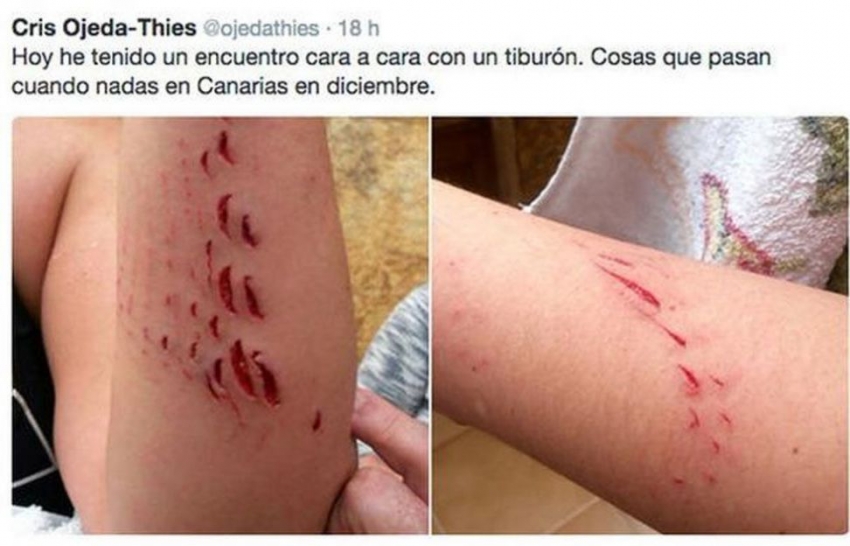 The story of the first shark bite in Gran Canaria waters in living memory has gone global. Here's what actually happened.

While some newspapers have gone for "shark attack" headlines, the incident was a shark bite and a long way from a Jaws-style savaging.

A Spanish tourist, swimming about 20 metres from the shore close to the east coast town of Arinaga, was bitten on the forearm by a small shark about 170 centimetres long. She kneed it and it swam away so she went back to the shore. The bite was bad enough to need stitches so she went to the hospital where she a bit of a star turn as none of the doctors had ever seen a real shark bite before.

The victim then tweeted out a photo of the bite and this has now been retweeted 1800 times. She later said in a press interview that the worst thing about the incident was that she couldn't  go back into the water because of the stitches.

What kind of shark?

The Canarian Shark Alliance, a charity organisation dedicated to protecting sharks in Canarian waters, identified the shark as a silky shark (Carcharhinus falciformis) after talking to eye witnesses. Silky sharks are one of the world's most common and widespread sharks but are Oceanic in habitat and rarely come close to shore. They have been known to steal fish from spearfishermen and to pester divers, but bites are rare.

The victim's description of the shark as "grey-brown" suggests that it could also have been a copper shark (bronze whaler) or a nurse shark, both fairly common around Gran Canaria and more likely to be in shallow water. It definitely wasn't an endangered angel shark as they only have one row of teeth and the photos of the bite clearly shows a double set.

Is it safe to swim in the sea in Gran Canaria?

Stay in the pool if you must but statistically, you are far more likely to be bitten by a tourist than a shark.

Alex Says: I've been snorkelling around the Canary Islands for over 30 years and have only ever seen small sharks twice. Both times they were less than a metre long and swam away from me as fast as they could.

Is Gran Canaria a safe destination in general?

With no poisonous snakes or bichos, a low crime rate, European health and safety standards, happy locals and an all-around laid-back atmosphere, Gran Canaria is one of the safest destinations on Earth. Here's a summary of the few dangers of Gran Canaria. It covers things like sunburn, cars on the wrong side of the road and the odd crime.

We have 2529 guests and no members online