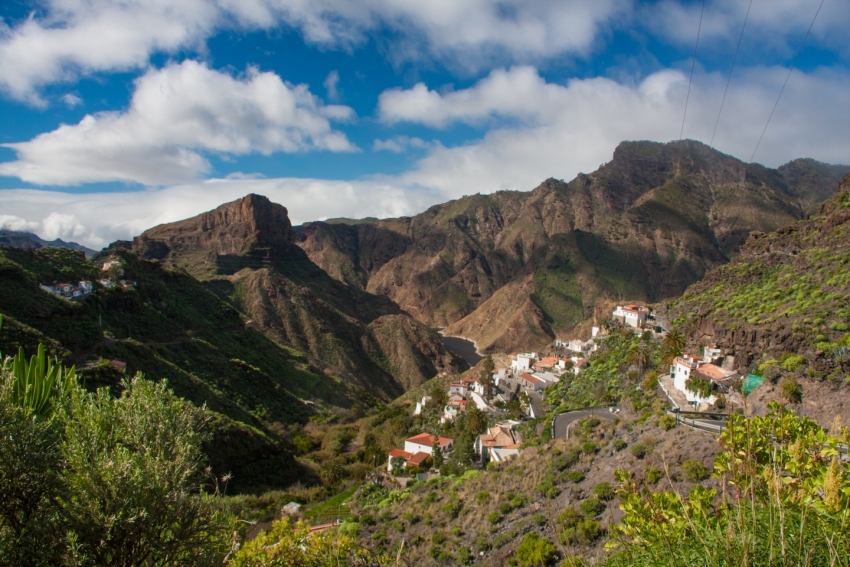 Carrizal de Tejeda: One of Gran Canaria's prettiest and most remote hamlets

We covered Gran Canaria's Top Ten Unmissable Spots here, but had to leave lots out; Here're some of the great places in Gran Canaria that don't get the crowds. 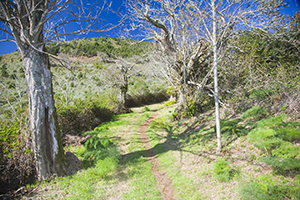 Osorio is one of Gran Canaria's greenest spots and the English-style garden by the house is the best place to spot the island's little green tree frogs.

Technically you need a permit to visit Osorio but nobody is ever turned away. If you arrive during office hours Monday to Friday, sign in at the office and you are insured against accidents. If you don't, then you can still walk around but you're not covered by insurance (but your travel insurance covers you anyway).

The water here is a vivid blue provided that the sea is calm and the snorkelling along the rocks on either side is excellent.

Las Mujeres beach is nudist but most nudists head 500 metres west to Montaña de Arena to strip off. 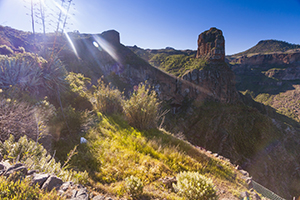 Half way down the GC 606 road, you get to the Mirador del Toscón. Walk up the steps carved into the rock and you see the huge Roque Palmes standing right in the middle of the Barranco del Sibero: one of Gran Canaria's most rugged and remote valleys. On any other island this huge volcanic monolith would be a iconic landmark but on GranCanaria it has to compete with Roque Nublo and Roque Bentaiga.

Carry on down the road and you arrive at Carrizal de Tejeda: a tiny white hamlet in a palm-filled valley that is Gran Canaria's most remote settlement. There's not much to do except wander about, enjoy the peace (listen out for the partridges) and try to find the barman.

The Maspalomas botanical garden, called the Parque Botánico is hidden in plain sight right next to the main roundabout at the bottom of the hill that connects Playa del Ingles with Campo Internacional.

It's home to a lovely collection of tropical flowers, palms, cactus and fruit trees such as bananas, papayas and macadamia nuts. 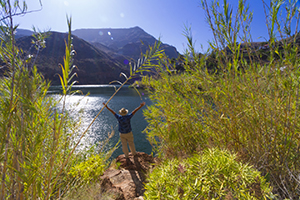 The Ayagaures valley starts just by Aqualand and is a spectacular drive just minutes from Playa del Inglés and Maspalomas resorts. The lower part is all mango and orange plantations on terraced farms while the higher part is pine trees surrounding two stunning reservoirs. You can even drive over the wall of the higher reservoir with the sheets of water on either side.

A fantastic drive and the option to come back via Montaña la Data and see Palmitos Park from above. 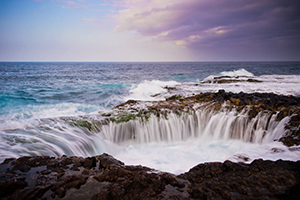 The La Garita blowhole is a local landmark but never makes it into the brochures. Water doesn't shoot up into the air like a geyser but it does rise and fall by several metres with the waves. It's like watching and listening to the sea's heartbeat.

The bufadero is a few minutes walk south of La Garita beach.

A great spot to reconnect with mother nature and a must visit for landscape photographers.

The south-east coast of Gran Canaria is the bit you look at as you bomb down the motorway from the airport to the resorts. There really isn't much here for visitors except the cute-as-a-button harbour and vast seawater pools at Castillo del Romeral just north of El Berriel Airfield. The pools are surrounded by coconut palm trees and their slightly decrepit state makes them all the more charming; You feel like you are in some far-flung Colonial town in Portuguese Africa rather than in Europe.

The pools are surrounded by coconut palm trees and their slightly decrepit state makes them feel more Maputo than Maspalomas. 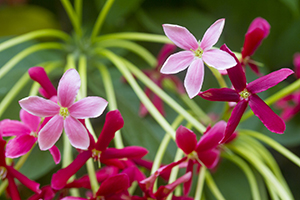 The Huerto de las Flores sunken garden is right in the middle or Agaete town but the doorway is tucked down a side lane and lots of visitors miss it. The gardens are full of exotic fruit tree like mangos, strawberry guavas and Barbados cherries and there's lots of tropical palms and trees.

This is the spot to sample the Agaete Valley's coffee. The little café tucked into the corner serves it by the cup and sells bags of ground beans. An Agaete coffee and a slice of cake costs €3.50.

The lost world of south-east Gran Canaria, this narrow canyon has rock walls up to 300 metres high that are riddled with caves and isolated side gorges. It was a haunt of the island's original Canarii inhabitants and parts of it still haven't been explored. A series of stone piles, called mojones, up to two metres tall are thought to date back over 1000 years.

Access is via a 200-metre gallery cut into the solid rock and so few people visit that there are no paths once you reach the valley floor. Within Barranco Hondo is the Arco de la Coronada, one of Gran Canaria's biggest arches.

Barranco Hondo has enough water during the spring and early summer (in years when it rains in the south) for canyoning and swimming so take a towel and a spare pair of shoes.

The last vestige of the magnificent laurel forests that once covered much of north Gran Canaria, this pretty valley is full of rare plants and is often shrouded in mist.

Try the gofio escaldado at the Los Tilos restaurant here as it is made with pork rather than fish stock.

The walk through the forest starts just by where the GC 700 road from Moya meets the narrow GC 704 that winds up through the laurels and comes out close to Fontanales village. It takes about an hour to walk the circular path and the views from the top section are stunning.

Alex Says: The Doramas forest in this area of Gran Canaria was one of the most spectacular in the Canary Islands but was cleared for agriculture at the end of the 20th Century. 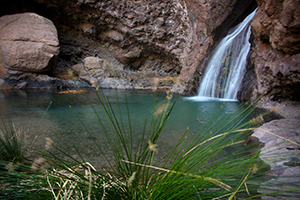 The little west coast village of El Risco is the gateway to Charco Azul: a blue pool and waterfall about 30-minutes hike up the valley. The path is signposted and anyone in the village will point you in the right direction. The pool is at it's bluest just after rain but the water is warmer in the summer.

We spend all our free time looking for new places in Gran Canaria to show you. Follow us on Facebook for photos of our latest finds.

We have 1892 guests and no members online