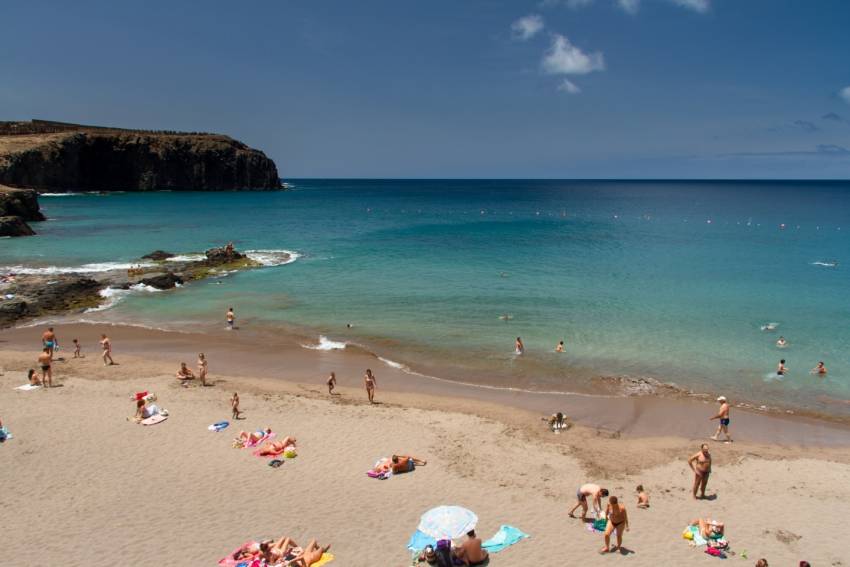 Tourists love big, sandy beaches with plenty of amenities and umbrellas for rent. Canarians, on the other hand, prefer their beaches to come with fish restaurants, or to be completely natural. We covered the Top Ten Tourist Beaches in Gran Canaria here, but this post is about the beaches that the locals keep to themselves.

Click on the beach names for an in-depth guide.

El Puertillo is the best beach along the north coast of Gran Canaria between Las Palmas and Galdar because it is sheltered in a bay. The sand is yellow-ish and swimming is perfectly safe provided that you stay close to the shore. Across the bay, a set of natural swimming pools are perfect for kids and big enough for a good swim. The little village that gives El Puertillo Beach its name has several excellent fish restaurants and a couple of shops. It feels like a miniature Puerto de las Nieves.

El Puertillo is about 15 minutes drive west of Las Palmas and has a bus stop.

El Confital has gone from slum district to pristine beach in 20 years and the whole area is protected from development. Confital is largely rocky, but there are patches of golden sand and safe swimming areas in channels amongst the rocks.  The coast is nudist from the end of the wooden boardwalk.

Confital wave is one of Europe’s top tube waves and there are always surfers picking their way out across the rocks. The break is superb but is shallow with a reef bottom: Don’t tackle it unless you are an experienced surfer and willing to put up with a bit of aggro from the locals boys.

Confital is just outside the cloud that often sits over Las Palmas and is the best spot in the city to watch the sun set behind Tenerife and Teide volcano.

Drive to El Confital along a graded dirt track and there is plenty of parking. Take all supplies.

Alex Says: See this post for a guide to the El Confital surf wave.

Melenara Beach is Telde’s local beach. If it was golden it would be a tourist attraction but its sand is too dark for most visitors. The locals don’t mind as the fish restaurants behind the sand are among the best on the island. A lot of the fish is farmed just offshore. Next door is another, similar beach called Salinetas. Melenara is often sunny if Las Palmas is cloudy.

Las Burras is between Maspalomas and San Agustin and is where Canarians go to avoid the tourist crowds in the south. Walk to it by following the coastal path north east from Playa del Ingles. Las Burras has plenty of golden sand and sheltered water.

Sardina del Norte is a fishy place with imposing cliffs. Scuba divers flock here for the large angel sharks and rays that gather just offshore while everyone else eats fish and calamares in the restaurants. Sardina beach is only small and sometimes gets washed away during winter. However, it's mostly sandy and a great little spot for north coast sunbathing.

One of the small sandy beaches between San Agustín and Bahia Feliz that get a few tourists from the complexes behind but are mostly empty. Access is via Bahia Feliz or down some steep steps from high cliff at the far north of San Agustín resort. El Pirata can be windy but is a whole different world from the tourist beaches just around the corner.

Guayedra is just past Agaete on the amazing West Coast Road. It’s a mixture of sand and pebbles but is sandy at the end of the summer. During the week, Guayedra is often deserted but it fills up with locals from Galdar and Guía during the weekends. It’s also popular with Las Palmas nudists

Get to Guayedra by turning off the west coast road down a track and park by the little stone house. The beach is down the hill and then to the right. You can also walk to Guayedra from Puerto de las Nieves in about an hour along a cliff edge path. Take all supplies.

Puerto de Las Nieves is a little fishing village in the north-west corner of Gran Canaria with a pebble beach either side of the jetty. The town is popular with Canarians at the weekends thanks to its excellent seafood restaurants

From the beach to the east of the jetty you can swim over to the remnants of the famous Finger of God rock that collapsed in 2005.

Just east of the town along the promenade are Puerto de las Nieves’ excellent natural swimming pools. They are safe on all but the roughest days and the views of the west coast (known as the Dragon’s Tail) are spectacular.

Alex Says: Head to the little terrace in the Las Nasas restaurant from lunch right by the beach. Arrive at 1 pm and you will get a table. Any later and there are queues.

Find Burrero Beach and you are guaranteed to be the only tourist on it. It’s a small beach with fishing boats pulled up on the sand and its own tiny Guanche ruin. There is a small village within walking distance with a bar and a shop, but it’s best to bring supplies.

Burrero is just south of the airport and is sheltered enough from the east coast wind to make it a pleasant beach. A rocky headland protects the water.

Veneguera valley was slated for development, but locals protested so fiercely against the resort plans that they were shelved indefinitely and the beach remains untouched. We much prefer it as it is.

Veneguera beach is a mixture of dark sand and smooth pebbles and there isn’t much there except for an old stone jetty crumbling into the sea. In the barranco behind the farms produce some of the island’s best mangos.

Get  to Veneguera down the rough track from the Mogán Valley but bear in mind that your car hire company won’t appreciate a call out for a broken axle. You can get down there in a standard car, but a four wheel drive vehicle is better. Veneguera has no facilities and is often full of campers and Canarian families during August and fiesta weekends.

We have 2011 guests and no members online