Now Is The Perfect Time To #Brexit Your Timeshare 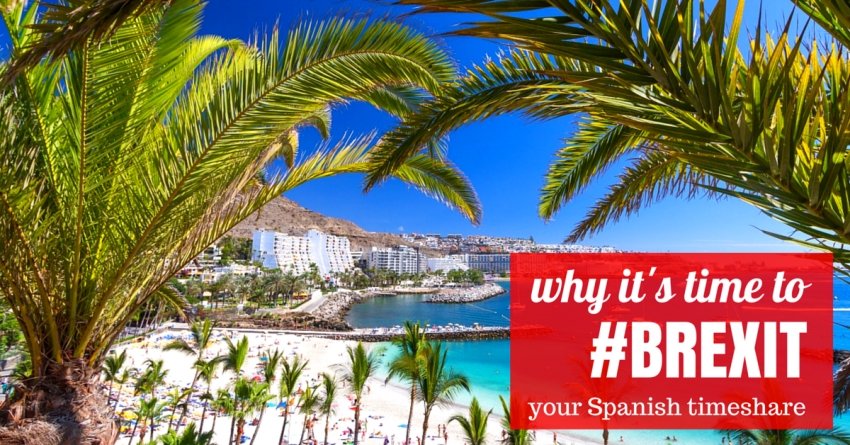 Whatever side of the #Brexit debate you're on, the UK's decision to leave Europe makes British timeshare owner's position uncertain. Here are the four reasons why now is the time to #Brexit your Spanish timeshare and get your money back.

Spanish law is finally on your side

Spanish supreme court rulings make thousands of timeshare contracts signed in the years after 1998 (when Spain passed a strict new law) so illegal that they are void.

Now, for the first time since 1998, Canarian and Spanish courts are ordering timeshare companies to return money to their clients. The first unappealable ruling was in 2015, but they are coming thick and fast in 2016.

If you signed a timeshare contract after January 4, 1999 and it includes any of the following, you can go to court, get it cancelled, and get all your money back.

An in perpetuity clause: All timeshare contracts must last between three and 50 years.

Floating weeks: All timeshare contracts must have a defined date. This includes points; all contracts containing points are void.

Deposits taken within the cooling off period: Did you pay a deposit with 14 days of signing your Spanish timeshare contract? Your contract is legally void. If your contract also includes an in perpetuity clause or a floating week, and you paid a deposit with 90 days, it is also void.

AND, if you paid an illegal deposit, you are entitled to all your money back, plus twice the deposit you paid. In many cases, the extra money you get more than covers the legal costs of claiming your money back.

Read more about why this is the real deal and why the timeshare companies have nowhere left to hide.

The weak pound amplifies your compensation

With #Brexit uncertainty due to depress the pound for the foreseeable future, now is the best time to start the legal process and get your money back. Your legal costs are buffered by the extra money you get by converting your money from euros into pounds.

Or, just keep the money in euros and never have to worry about exchange rates again.

Long-term uncertainty means now is the time to act

Illegal timeshare contracts are being annulled on a weekly basis and there is no immediate reason to think that this will change.

But, last week the bookies said the UK would stay in Europe and most people expected the British to vote remain.

Things change, and timeshare companies have good lawyers and bankers. What if timeshare works out a way to get out of paying up for illegal contracts? Or just runs out of money?

Start the legal process now and you stand the best chance of getting your money back whatever the future holds.

When Spanish law declares a contract void, it's as if it never existed. That's why the timeshare companies have to give back all the money they took when you signed up (more in the case of illegal deposits).

If your timeshare contract is void, then a big company has your money and you have every right to demand it back. Even if you love your timeshare weeks, why should timeshare keep thousands of pounds of your money.

Money that could pay off your mortgage, beef up your pension, or pay for your children's university fees or 10 amazing holidays?

This is really happening: In May 2016, an Anfi client got €189,000 returned by the company after the Las Palmas High Court voided their contract.

Timeshare owners are getting their contracts annulled and their money returned on a weekly basis.

And now is the time to join them.

You can get your timeshare money back

If you think your Spanish timeshare contract is illegal, contact the Canarian Legal Alliance today. Based in Gran Canaria, it is Spain's leading timeshare law firm.

The CLA's legal team will contact you with 24 hours and you'll know whether you can get your contract annulled and your money back.

We have 2844 guests and no members online