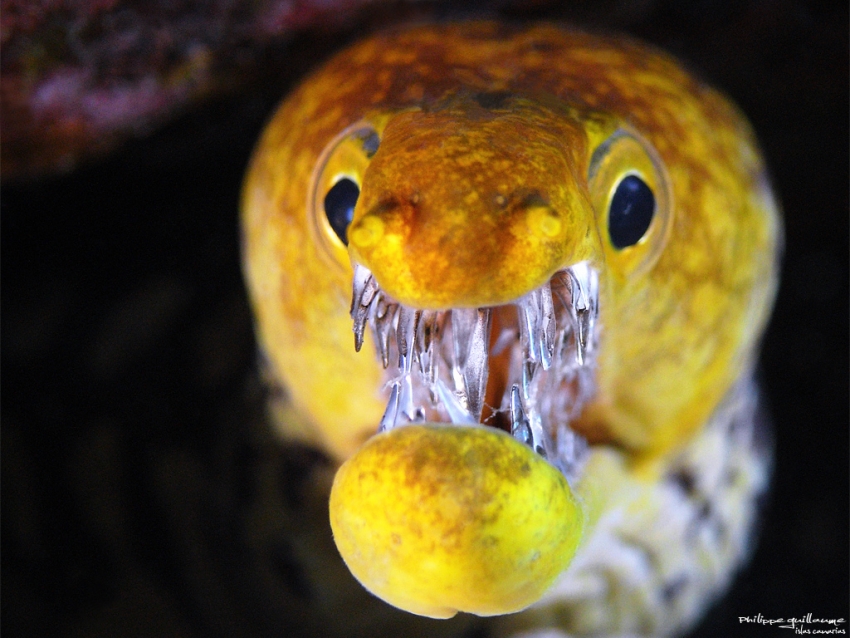 We've counted over 60 species of fish during a single snorkel in Gran Canaria so here's a useful guide to the most common and interesting fish species that you are likely to see when you take the plunge.

The key to seeing a lot of fish in Gran Canaria, and anywhere in the Canary Islands, is to pick a spot with plenty of big underwater rocks. This does mean that you have you go a bit further that the water right in front of your sun lounger on the beach.

Trust us, it's worth the effort. 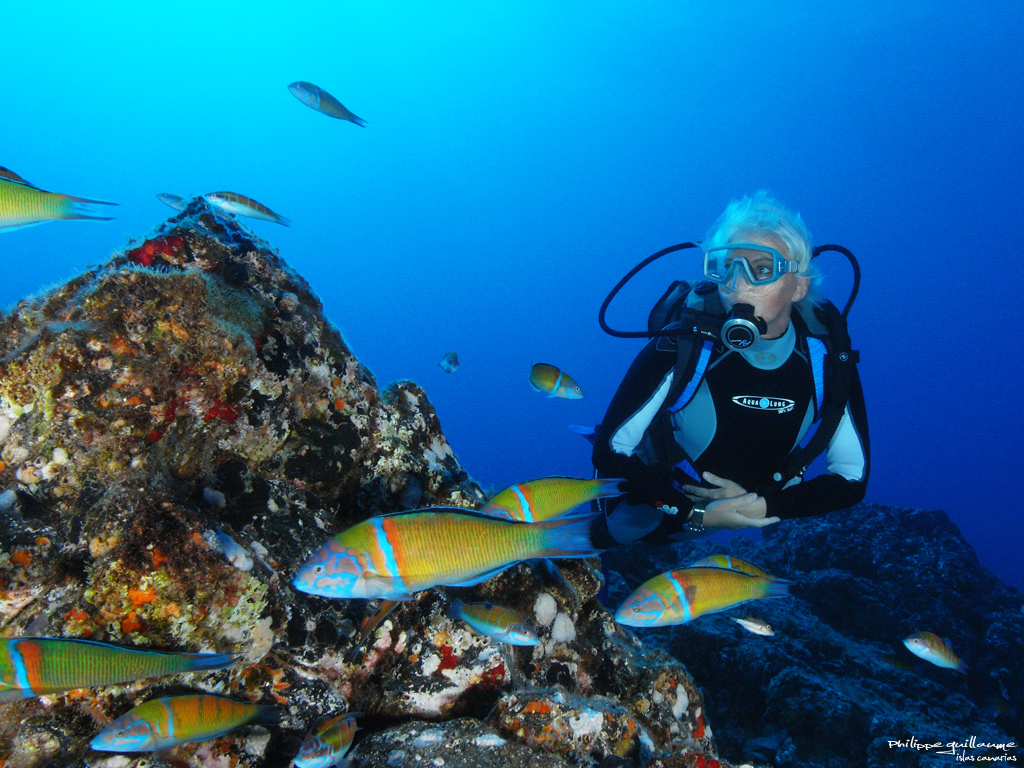 The first fish you'll see next to rocks are the brightly coloured ornate wrasse (pejeverde) and deep blue damselfish (fulas). They hang around anywhere where there's a patch of rock or weed.

Look closely at any rock and you'll see a myriad of blenny and goby species (cabozos) and small red scorpionfish (rascacios); Poisonous but harmless in the water.

We're pretty sure that you are only ever about 10 metres from an octopus (pulpo) in Gran Canaria but they are tricky to spot.

Look out for alfonsitos in caves; They look just like goldfish but have a giant, black eye. 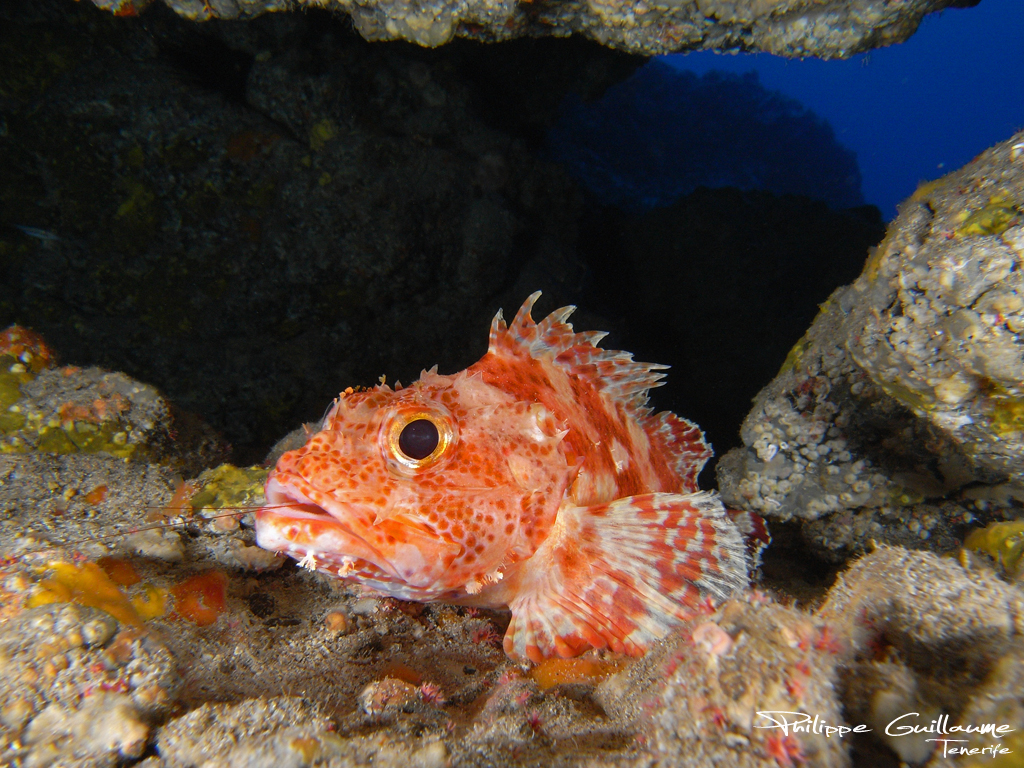 Tiny pufferfish will be amongst the rocks too; The most common ones have a brown back and little blue spots all over their cream flanks.

There are moray eels around rocks too, but they tend to be shy and only ever stick their heads out during the day.

If you see a sea snake, don't worry as it's actually a type of harmless eel called a culebrita (there are no sea snakes in the Atlantic Ocean). 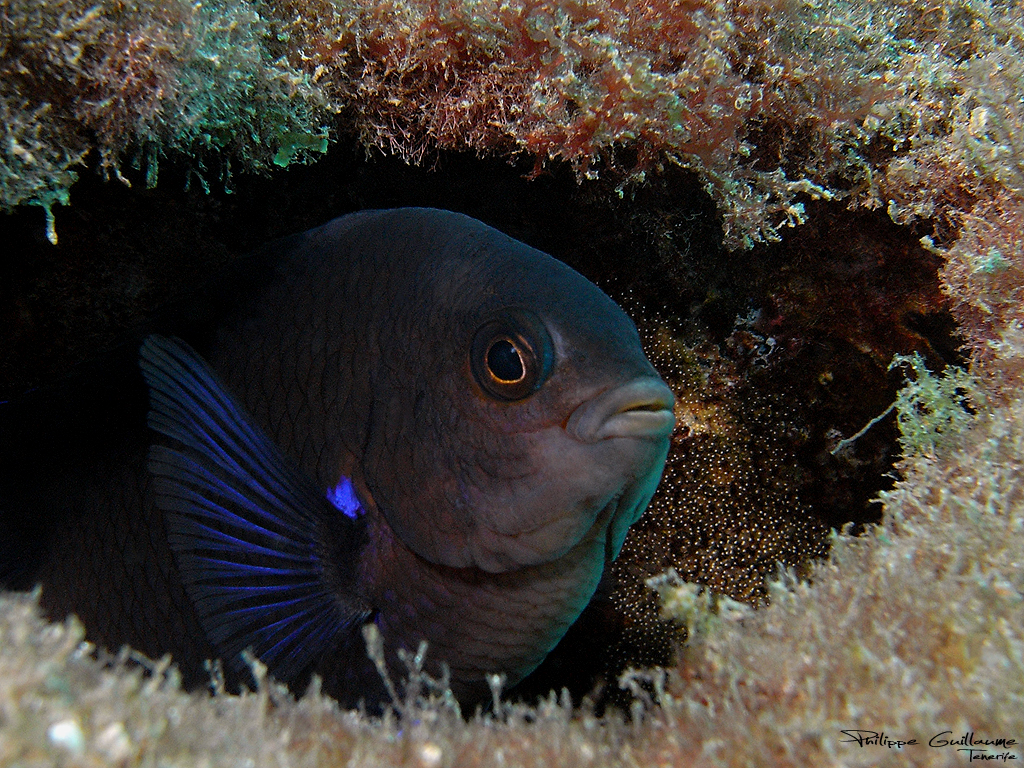 Striped bream are everywhere in Gran Canaria and can form huge schools. They are inquisitive fish and often come up to snorkelers to see if they have any food one them.

There are over 10 species of striped bream living around the Canary Islands and each one has a different pattern of stripes.

Sargos are the most common and have lots of thin vertical stripes while the sargo breado has broad, chocolate brown to black stripes. It's a shy species but is becoming much more common now that spearfishing is under control. 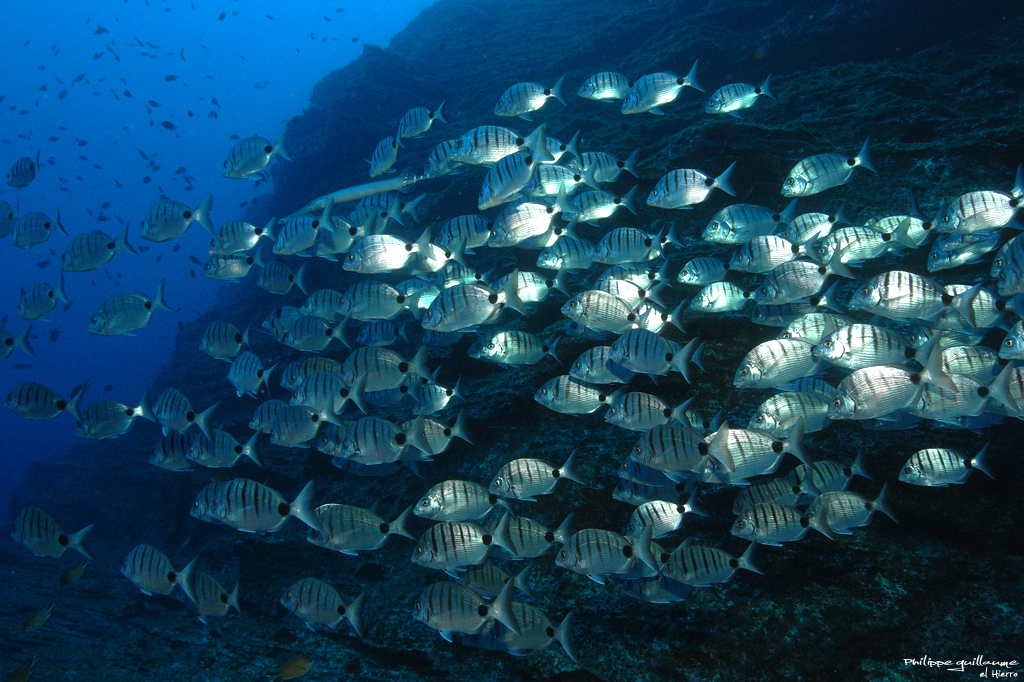 The seifo has two stripes; one just behind the head and one just by the tail, while the galana has just one tail stripe and prefers open water.

The amarillo, with a yellow back and single tail stripe, hangs out in seagrass beds while the sargo picudo looks just like a sargo except that it has finer stripes and a pointy mouth.

If you see a shiny fish with a black spot behind the eye, it's a gilthead bream escaped from the fish farms. 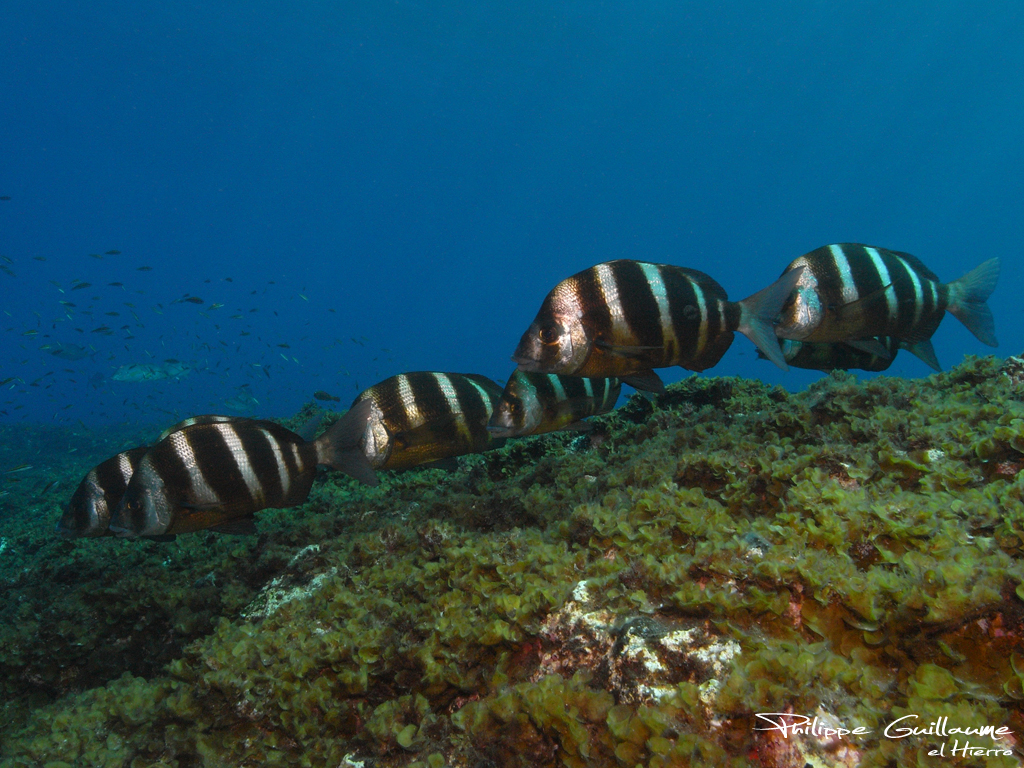 Similar to striped bream, and almost as common, are the porgies (salemas). In the sunshine, they have horizontal blue and yellow stripes and they hang out in big schools close to the bottom.

Don't confuse them with grunts (roncadores), which also form big groups but don't have any stripes.

Look carefully and you may see amberjack (medregales) or the similar jurel mixed in with groups of salemas or roncadores.

If you're really lucky a baby jurel a couple of inches long will follow you for the whole time you are in the water. 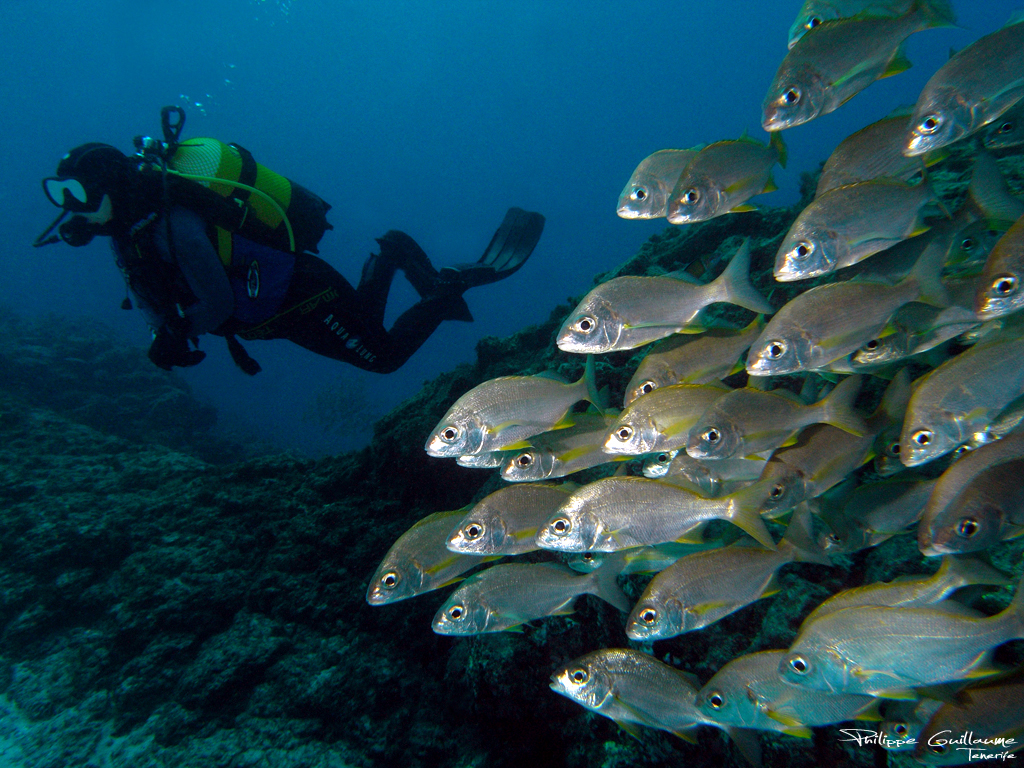 Torpedo-shaped grey mullet (lebranchos) are common al over the place and are the fish that you see in the harbours waiting for bread. Seabass (lubina) look like mullet but are flatter along their vertical axis. They are escapees from the aquafarms.

Parrotfish (viejas) are common and cruise over rocky bottoms in relaxed groups. The females are brown with a spot behind the eye while the males are bright red with blue and yellow patches.

Small grouper (meros) are common around rocks but are shy due to years of overfishing (they are among the tastiest fish in the Canary Islands). 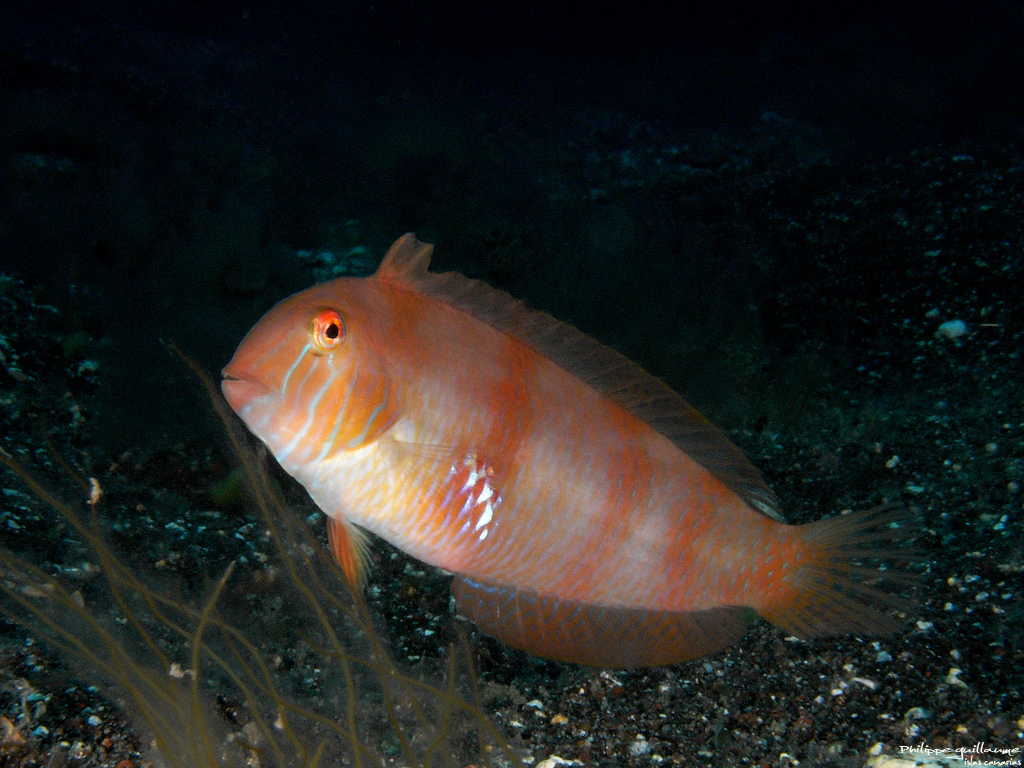 If you do find yourself snorkelling over sand, all is not lost. Look out for lizardfish buried in the sand with just their head sticking out, or poisonous weevers (arañas) with their dorsal fin poking out of the sand.

Salmon-pink cleaver wrasse (pez peine) also hang out over bare sand and can bury themselves faster than the eye can follow if pestered. 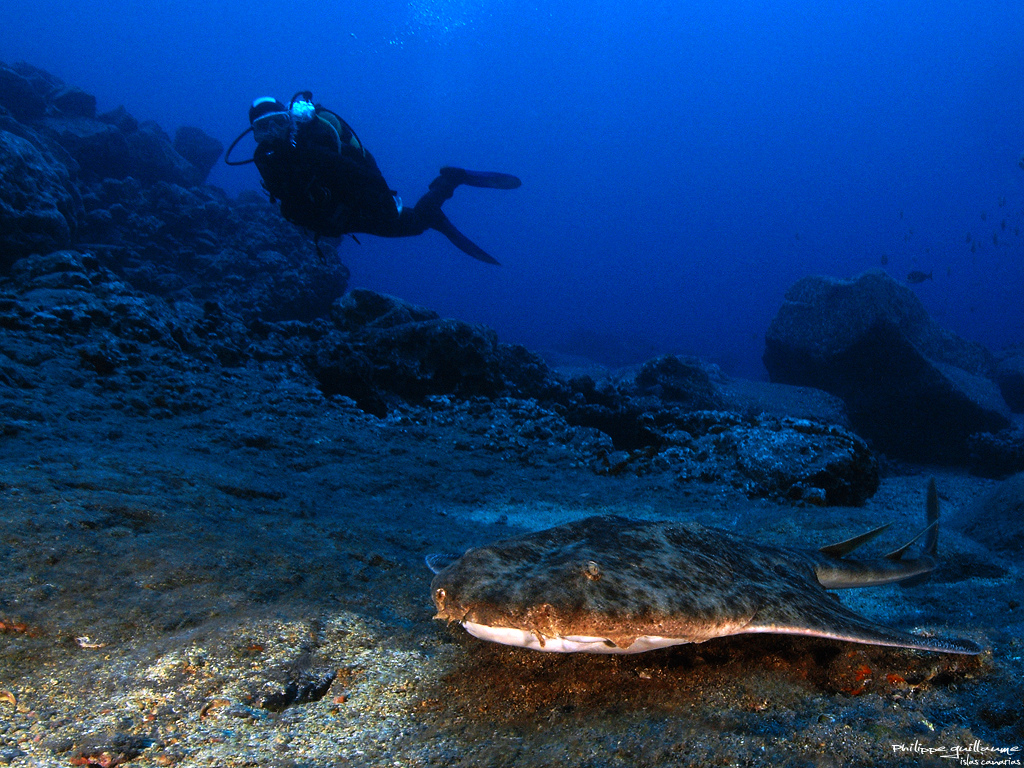 Herreras, yet another striped bream, dig holes in the sand with their mouths and often hang out with red mullet (salmonettes).

If you're lucky, you'll find a big stingray (chucho) resting on the sand or even an endangered angel shark (angelote). Both are harmless provided that you leave them in peace.

All photos in this article taken around the Canary Islands by Phillipe Guilliame and published here under a Creative Commons licence.

We have 1618 guests and no members online