Three Little Things You Have To Do In Las Palmas 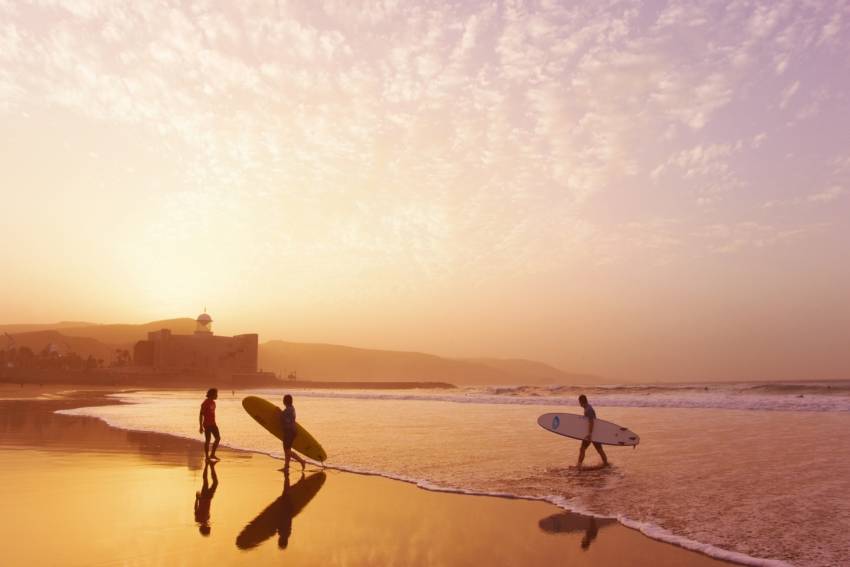 Learn to surf in Las Palmas

Las Palmas is a Spanish city with a Canarian accent and a few South American flourishes. It's the only city in Europe where salsa and coconut palms thrive alongside mojo, tapas and vino tinto.

There are two ways to see Las Palmas: Get sore feet seeing the whole place in a day and ending up with a full memnory card and that fuzzy been-there done-that feeling that fades as soon as you move on.

Or, you can do laid-back Las Palmas at its own pace:  Instead of charging around take your time doing very little, very thoroughly.

Start by sitting down and drinking a proper cofee

In Las Palmas coffee is made by grown ups instead of baristas and it's all the better for it: Pure bean juice unsullied by pretension, syrups and towers of cream. It comes served in a white porcelain cup with a paper bag of sugar and a tatty old teaspoon. It tastes of coffee.

Order a café solo for a pure espresso, a cortado for an espresso with a dash of milk and a café con leche for a latte. Or go for the rocket fuel option of the leche y leche: A cortado with a shot of condensed milk at the bottom.

In the summer, go for café con hielo. It’s a shot of espresso served with a glass full of ice cubes on the side. You pour the coffee over the ice, swizzle it around a bit and then drink. Simple and delicious.

Every bar and café in Las Palmas has a steam espresso machine so pick one with a good view. The Canteras beachfront, the cobbled streets of Vegueta and any of the palm-shaded squares are splendid spots for a coffee break.

In the 1500s Spanish steel met the sticks and stones of the original Canarii inhabitants. It took them 100 years to conquer the Canary Islands, longer than it took to subdue the Aztecs and the Incas.

The unfortunate consequence of this Conquistador trial run was the extinction of Canarii culture. Their languages, religion, folk tales and music were obliterated. All we have left are their mummies and pottery: Meagre remnants of a race that considered themselves kings but didn’t understand the wheel.

The best collection of Canarii artefacts is in the Museo Canario or Canary Museum in Las Palmas’ historical Vegueta barrio. Thankfully, it is compact and not afraid to display plenty of skulls and mummies.

Spend an hour in the museum and then the day wandering around Vegueta. 500 years ago it was besieged by the same people now lying shrivelled in the museum: The only European city ever besieged by stone-age warriors. What if they had overrun the walls? The whole history of Spain and South America would be different.

Canteras Beach is three miles long and changes every 100 yards. The north end is all coconut palms, golden sand and clear water. It’s great for sunbathing and snorkelling.

The southern La Cicer end in front of Guanarteme barrio is the surfing end. Twenty years ago it was isolated within the city and overshadowed by fish-canning factories and a power plant. When the town hall shut down the factories and extended the promenade the barrio woke up. Its sullen pot-smoking surfers went to business school and opened surf schools and hostels.

The waves aren’t world class but they are consistent and the right size for beginners. Within a day you can learn the basics of surfing and then hit the bars for an introduction to local rum. Pace yourself because the city doesn’t liven up until midnight and dances until dawn.

There are no flamenco shows or tour guides dressed in traditional costumes in Las Palmas. Like its coffees, it is hot, full of flavour and completely free of pretension. That’s why we love it and you will too.

We have 3137 guests and no members online