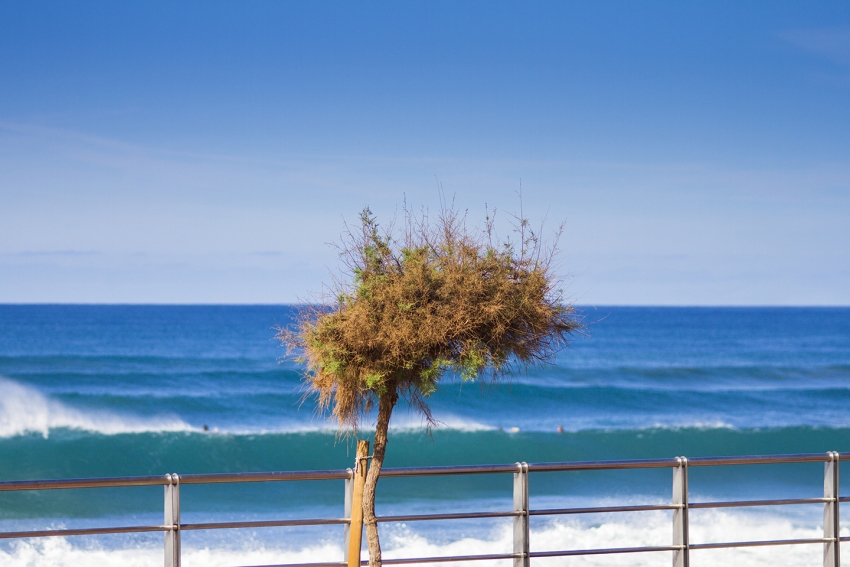 The tamarisks at La Cicer are becoming icons of Las Palmas city www.photosgrancanaria.com

Everyone who visits Las Palmas sees the cathedral in old town Vegueta and walks along iconic Las Canteras beach. Here's a list of some of the local icons of the city that are easier to miss.

The palm tree columns in the cathedral

Everyone who visits Vegueta sees the cathedral but not many people go inside. This is a shame, as its huge stone columns look like palm trees thanks to the stone ribs that cover the ceiling. On a sunny day, the light streams through the stained-glass windows and bathes you in multi-coloured light.

Getting into the cathedral

The tamarisk trees at La Cicer

The tamarisk trees that grow along the La Cicer beachfront at the south end of Las Canteras beach have only been there for a few years but are fast becoming iconic. With bare trunks and a puffy ball of foliage blown backwards by the sea wine, they look great in photos with the waves and sunset in the background.

Lolita Pluma was a colourful character who spent her days in Santa Catalina Square for years until she died in 1987 aged 83. Always flamboyantly dressed and with heavy makeup, she walked around the square surrounded by cats and became an island institution. Lolita sold chewing gum and postcards to locals and tourists and wasn't afraid to unleash her sharp tongue if anyone annoyed her.

When she died the city put up a bronze sculpture of Lolita and her cats. It's at the north end of Santa Catalina Square by Luis Morote street. Lolita Pluma is also a gay icon in Las Palmas and one of the Square's best bars is named after her.

The Nestor Paintings In the Museo Nestor

Lanzarote's César Manrique dominates the Canary Islands artistic legacy by Gran Canaria also has its own local star: Nestor de la Torre, known as Nestor, was in many ways an early version of Manrique and inspired his drive to protect the islands. Nestor designed the iconic Pueblo Canario plaza by the Santa Catalina hotel.

Many of his best works are in the Museo Nestor right by the Pueblo and you have to see his splendid Poema del Atlántico paintings featuring stormy seas, giant fish and nudes.

The idolo de Tara in the Museo Canario

The original inhabitants of Gran Canaria were defeated by the Spanish and their language and much of their culture disappeared as the survivors of the war integrated into Spanish life. Most of what we know about the Canarii comes from archaeology and the best place to see it in Las Palmas in the Museo Canario. It holds a small but fascinating selection of aboriginal pottery and mummies from all of the Canary Islands and the iconic idolo de tara pottery figurine.

Discovered in Gran Canaria, it is the best example of aboriginal art and you'll see it all over the island. Believed to be a fertility symbol, little idolos are still given to couples trying to have a baby.

An unlikely icon with a rude name: La Casa del Coño was the first high-rise building in Las Palmas and got its nickname from what Canarians used to say as they looked up at the 12-storey scaffolding back in the 1950s: "Coño" translates roughly as "bloody hell".

We have 3008 guests and no members online