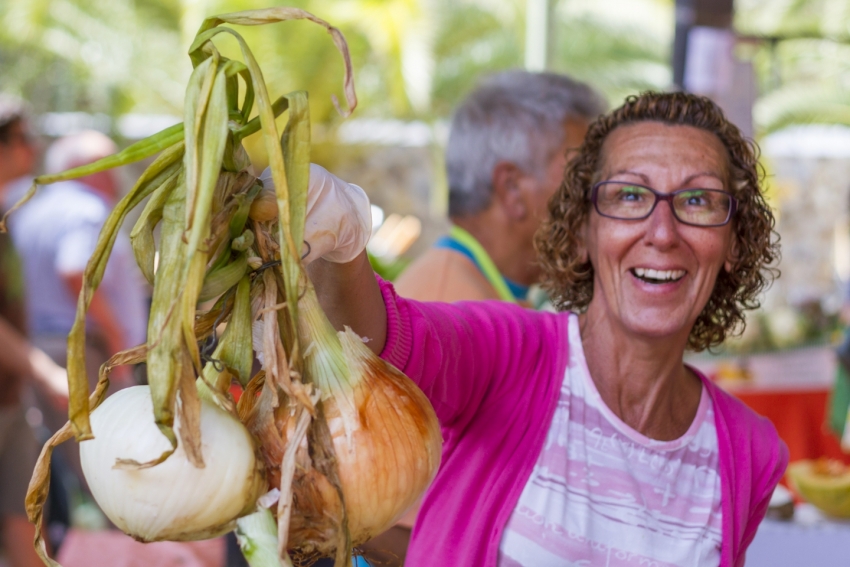 The big three supermarket chains in Las Palmas are Hiperdino, Mercadona and Spar, along with the giant Carrefour in Las Arenas shopping centre. There's not much to choose between them on price so you can just use the nearest one and ask them to deliver. All have plenty of fresh fruit and vegetables but most is imported and bland (Carrefour is the best of the bunch). Check the fish carefully; You're much better off doing your fresh food shop in the city's markets and fruterias.

The pricier Supercor and Hipercor supermarkets dotted around Las Palmas are part of the El Corte Inglés department store. They still can't do fruit and veg but have a better selection of fish and meat.

Shop at supermarkets for your dry and tinned goods, booze and garafas (big bottles) of drinking water.

Alex says: Buy your bananas in little local shops rather than the supermarkets. They are always tastier because they are picked riper.

The main Las Palmas market is the Mercado Central just off Mesa y Lopez but there's a good one in Vegueta and another in Ciudad Alta. They are all going through modernisation at the moment as they lost the younger generations to the supermarkets. Now you get tapas stands and sushi bars alongside your veggies. The Mercado del Puerto at the North end of Las Canteras beach still has fruit and veg stalls but is now dominated by little restaurants.

The markets sell fresh fruit and veg, cheese, meat and fish and prices are the lowest in town. Look out for locally grown, seasonal fruit for the best value; mangoes and navel oranges in winter, plums in early summer, custard apples and persimmons in autumn, etc.

Some stalls deliver, provided that you spend over a certain amount (around 30 euros).

Shop at the morning markets for your fresh fruit and veg, and for quality meat and fish.

Lots of Las Palmas locals head to the hill towns at the weekends to do their fresh shop in the markets. San Lorenzo is the closest to the city but only opens on Sunday. It is a farmer's market and all produce is local. The cheese stall is excellent.

Further up, you have the somewhat gentrified Santa Brigida market on Saturdays and Sundays. It's not as cheap as San Lorenzo but it does have a cracking Canarian wine stall. Further still is the cavernous, some would say ugly, San Mateo market with a vast selection of local and imported fruit and veg at great prices.

The weekend markets are fun, but if you have time to shop in the Las Palmas markets during the week, you don't need to visit them.

Fruterias selling nothing but fresh fruit and vegetables have popped up all over Las Palmas in the last few years. Their produce is local and imported (the local stuff isn't packed in cellophane). Fruit tends to be riper than in the supermarkets and better value. Ask in your nearest frueria if you need a seasonal veg like parsnips or sprouts. It's amazing what they can source if you give them time.

One of the great things about living in Las Palmas is that you're only ever a couple of minutes walk away from a little shop. Called estancos, they manage to sell almost everything from fresh fruit to piñatas, magazines to chorizo. Most close for lunch and all day Sunday but the Chinese run estancos open all day, every day.

Fruit, veg, and local cheese at estancos is often the best in town as it's delivered straight from family farms or local distributors.

Clustered by the central market on Calle Barcelona the Chinese supermarkets sell a huge range of Asian and Chinese ingredients. The fresh veg, like bok choi, snake beans, and yams, are grown on the island and the fruit, like lychees and pomelos, are imported. Look in the freezers for everything from dim sum and coconut water to king crab legs and seaweed, and on the shelves for all kinds of rice, noodles, sauces, and spices. You even get exotics like unsweetened peanut butter, salted jellyfish, and Japanese rice wine.

Lex says: The Chinese shops are great for vegetarians as you can get fresh tofu and lots of Asian spices.

If it isn't in Godhwanis, then it isn't on the island: This Las Palmas institution (at Calle Sagasta 61) has sold Indian and other Asian staples for donkey's years. While it now gets competition from the Chinese supermarkets it's still the place to go for Indian curry pastes, spices and all sorts of exotic ingredients (rosewater, onion seeds, etc). It also has a frozen section with excellent Indian breads.

For that special Vongole or romantic lobster dinner, head to the seafood nursery (vivero de Marisco) on the Las Canteras beachfront (south end, corner of Alfonso O'Shanahan). It has big tanks full of mussels, Galician oysters, lobsters, clams and crabs. Don't forget to say hello to the resident grouper Manolo el Mero. He's been there since the 1980s.

It used to be the Corte Inglés or bust for baked beans, Cadbury's chocolate and salty licorice but now there's the Tab Store on Calle Valencia just by the Central Market. It sells tons of British and American chocolates, sauces, and even cereals and cupcake decorating stuff.

We have 3186 guests and no members online