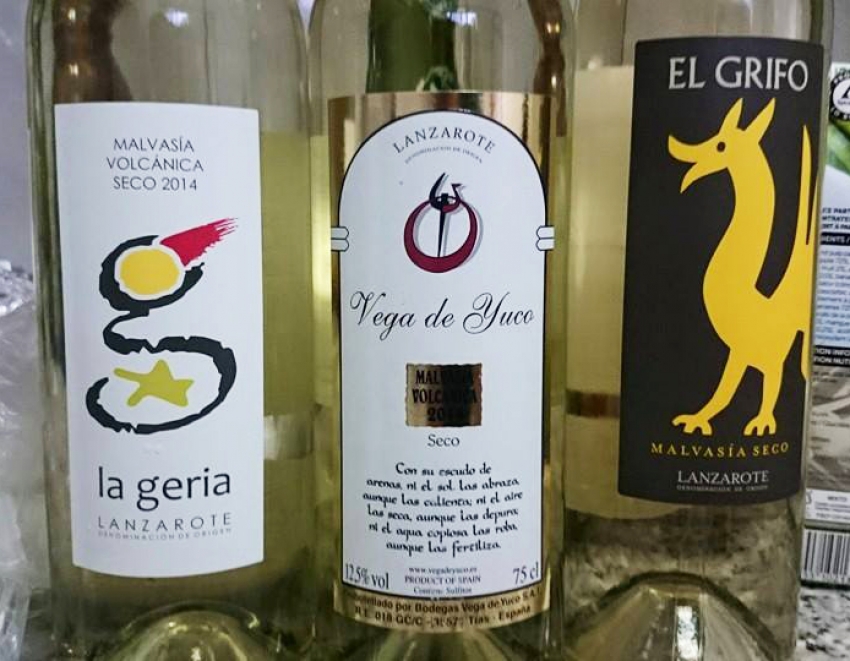 With Lanzarote's La Geria, Vega de Yuco and El Grifo white wines common on Gran Canaria supermarket shelves and selling for seven to eight euros, we tasted all three so that you know which is the best buy.

The three are dry white Malvasia wines from the La Geria wine region of Lanzarote so we expected them to be similar and to be typical Lanzarote whites.

Malvasia whites from Lanzarote are aromatic and should remind you of summer fruits like apricots and peaches, and white flowers like jasmine. They taste crisp and fruity and have a long, intense finish. Good ones have a characteristic zing.

Here're the results of a blind tasting of the 2014 vintage of all three:

Smells of vanilla and wood with a hint of lemon. In the mouth dry and crisp with no real fruit flavours. No malvasia zing and no intense finish. A hint of wood suggests that this wine has been lightly oaked.

The poorest of the three: Not worth the 7 euro price tag and not a good representative of Lanzarote's white wines.

This wine has pedigree: It's made by the oldest winery in the Canary islands and one of the oldest in Spain.

There's not much going on in terms of smell. A slight fruitiness is all we could detect. Once you try it you get a hint of citrus (Limoncello) and an intense finish. The acidity is balanced by a tiny bit of sweetness. El Grifo definitely has the Malvasia zing, but it does lack a bit of flavour.

We put it in second place; far better than La Geria but not quite as good as ...

This wine smells intensely of white flowers like jasmine, but that doesn't come through so much when you try it.

In the mouth, there's a hint of citrus and plenty of acidity and Malvasia zing. Overall it's a great Lanzarote white but it does smell a bit better than it tastes and it lacks a little in intensity.

Overall we thought it was the best of the three and great value.

The El Grifo and Vega de Yuco are good value for seven to eight euros and we recommend trying them when you're in Gran Canaria. If you like them and want to explore other Lanzarote Malvasia's look out for Yaiza (in the tall blue bottle) and Bermejo (green bottle with a rounded top). The Yaiza sells for 10 to 12 euros and Bermejo starts at 13 euros. The extra money gives you tropical fruit flavours and a richer feel in the mouth.

For a cheaper taste of Canary Islands wine, the La Frontera (tall green bottle) from El Hierro sells for less than five euros in big supermarkets and is far better than most Spanish wines at the same price. It's crisp, fruity and acidic and goes beautifully with white fish.

We have 3470 guests and no members online