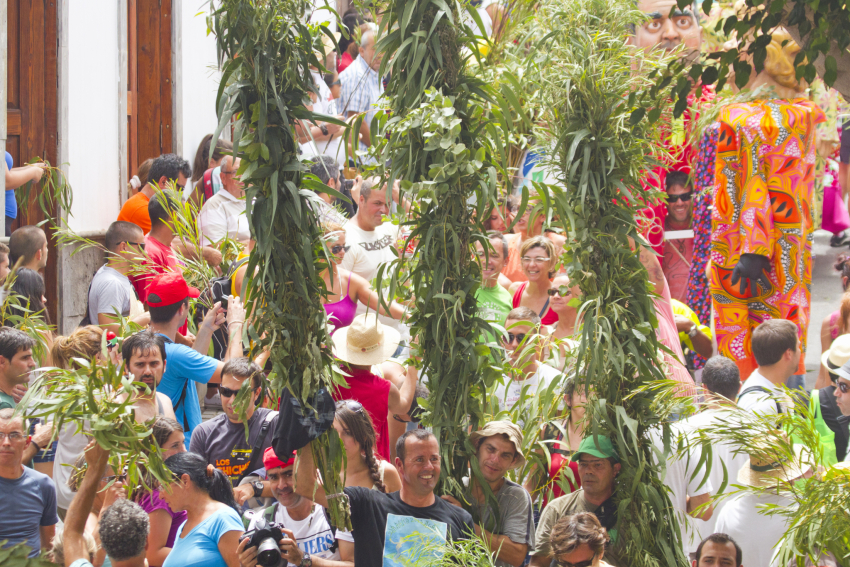 Summer is Gran Canaria's traditional fiesta season and most villages have at least one party weekend. However, these ten places take it to a whole different level!

La Rama starts in Agaete in the morning with the mother of all processions, led by the famous Agaete municipal band. It winds it way slowly and progessively more unevenly towards the sea at Puerto de las Nieves until the last survivors of multiple cubatas jump into the sea. La Rama in Agaete is always on August 4 but the town parties for most of the summer so there's nomally something fun going on.

Atalaya village in north east Gran Canaria celebrates its long history of making clay pots with a procession followed by a mud fight. It's a messy affair so don't wear any clothes that you want to use again. El Barro held on the first weekend of July

A long procession followed by the mother of all water fights is Lomo Magullo in Telde's way of celebrating the summer. It used to be a raucous affair but has now returned to its roots and is more fun because of it. La Traida del Agua is held on the second weekend in August (check dates) in Lomo Magullo, a mountain village inland from Telde in east Gran Canaria.

The best way to describe the Vará de Pescado is as a vast fish feast that honours the town's fishing history. It starts with a procession and ends with a vast sardine cookout. La Vará is right at the end of August.

The big San Juan beach parties all around Gran CanariaM but especially at Playa de Mogán, Playa del Inglés and Las Canteras; kick of summer in style. The party starts in late afternoon and goes on until the early hours with locals meeting on the beach to eat, drink and watch the midnight fireworks.  San Juan is always on the night of June 22.

The most traditional of Gran Canaria's summer fiestas, El Pino celebrates the island's patron saint with an overnight pilgrimmage up to the Teror church, followed by a solemn mass. Then everyone relaxes and the traditional music and dancing starts and goes on into the early hours of the morning.

About 50,000 people gather around the green El Charco lagoon at La Aldea de San Nicolas and all run into the water at the same time. The person who collects the most fish wins. Then there's a huge party. That's not true because the party had already started long before the fish run. El Charco is always held on September 11. See photos of the event here.

This free beach festival brings the best international soul acts right to the sand at San Agustín beach. It's the sister festoval of the long-standing Poretta Soul Festival from Italy and happens at the end of July. The festival on Facebook.

Bioagaete started out as a community run music festival after the island lost its WOMAD. Even though WOMAD is back (in October in Las Palmas) the team behind Bioagaete has kept going, making the festival better every year. All bands play for free and all proceeds are donated to charity. Bioagaete is help at Puerto de las Nieves at the end of August over three days. Website here.

Coastal villages and towns in Gran Canaria honour the patron saint of the sea during the Virgen del Carmen festivities in July. The main boat procession is between Arguineguín and Puerto de Mogán in mid-July ith the return trip a week later.

We have 2206 guests and no members online