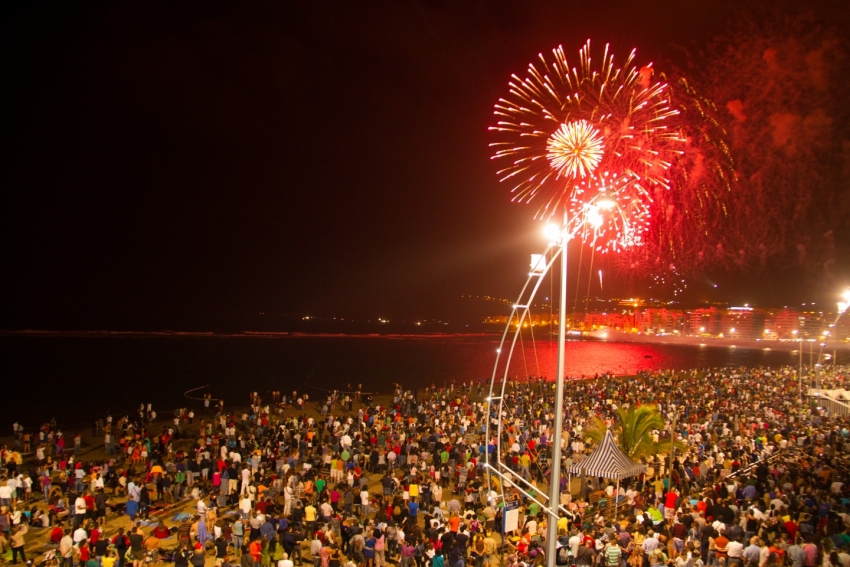 Gran Canaria heats up in June and the party moves to the beach for the annual San Juan bonfires and fireworks.

Most coastal towns and villages celebrate San Juan with a beach party and fireworks plus live music and lots of beer, rum and food.

What is San Juan?

The Bonfires of St John are celebrated all over Spain Portugal South America. They are a celebration of John the Baptist, always one of the most interesting Christian saints thanks to his connection with Gnosticism and alternative beliefs linked to the summer solstice.

In Gran Canaria, the traditional way to celebrate San Juan was was to light an enormous bonfire and have a party around it. The most famous celebrations are on the beach, but most towns and villages have a fiesta on the night of June 23.

These days, health and safety stopped most of the beach bonfires but most coastal towns put on midnight fireworks to make up for the lack of fire.

It's traditional in Gran Canaria to walk backwards into the sea at midnight on the night of San Juan. It brings you good luck for the rest of the year. Older people also throw fruit and flowers into the ocean.

This is convenient as you can wake up on the beach at dawn and breakfast is waiting for you on the shoreline.

Where to go for San Juan in Gran Canaria

San Juan is a big thing in Las Palmas as it coincides with the anniversary of the founding of the city (538 years in 2016). Las Canteras is always crowded with people and big groups gather for communal picnics and singalongs. There's live music at the northern tip of the beach and the fireworks at midnight are always worth staying up for. The party goes on late into the night.

The San Juan barrio just above Vegueta old town always puts on a decent party and a huge bonfire.

At Playa de Mogán, San Juan goes exotic with a Samba procession with fire-eaters and jugglers. There's a bonfire and fireworks at midnight. For a more traditional experience, head to the smaller villages for barbeques and local folk music concerts.

For a more traditional experience, head to the smaller inland villages for barbeques and local folk music concerts. There's also a wild party at Tasarte.

Playa del Ingles puts on a beach party at the Anexo 1 shopping centre down by the beach. There's a drumming procession, fire procession and a huge bonfire plus fireworks at midnight, live music and DJ.

Castillo del Romeral has a maize roast, bonfire and music while Juan Grande just inland does an outdoor horror film and maize roast.

San Juan in Arucas lasts for a whole week with lots of cultural events, exhibitions and music. Festivities focus around the Plaza de San Juan in old town Arucas. On the 23rd, there's an artisan market all day and live music in the evening.  The midnight fireworks go off from the top of Arucas volcano just behind the town.

Telde's old town barrio is named after San Juan and events in Gran Canaria's second city take a spooky turn. Telde has always been the home of witchcraft on the island so expect lots of esoteric fun in the Plaza de San Juan along wioth an atrisan market and live folk music.

The San Juan celebrations are at Sardina village right in the north-west corner of the island. There's a procession, live music and fireworks at midnight.

We have 2709 guests and no members online