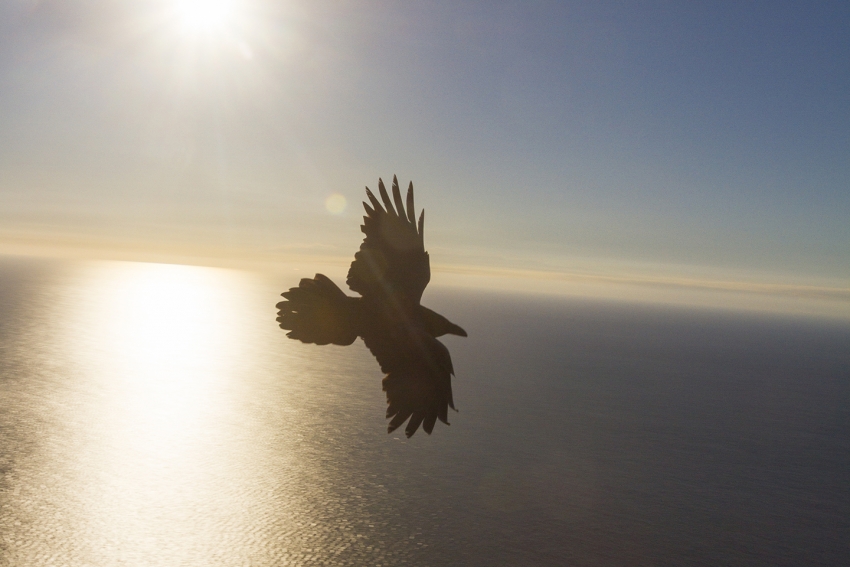 You see and hear Canarian ravens all over the Gran Canaria highlands, but the population has crashed and the species is in serious danger of disappearing completely.

The first sign that there's a raven nearby is often their honking call. Look up, and you'll  see one flying overhead, or surfing a thermal by a nearby cliff.

Canarian ravens (Corvus corax canariensis) are slightly smaller than European ravens with a finer beak and smaller collar of neck feathers. They used to be common all over the Canary Islands but are in serious decline in the Canary Islands.

In Gran Canaria, there were 150 breeding pairs in the 1980s, but the latest surveys found only 12 pairs. Most nest on the west coast sea cliffs and high Barranco walls in the cumbres.

Ravens are now in danger of extinction on all of the Canary Islands except Fuerteventura and El Hierro.

But I saw loads of them

It may seem strange to hear that ravens are rare in Gran Canaria because you see them all over the place. But that's because they hang around popular tourist spots looking for food.

It's lack of food that threatens the population; ravens used to follow herds of goats and feed of disturbed insects and the odd dead animal. They also foraged on farmland and on village tips.

Now that most goats are kept on farms, and lots of farmers grow crops under plastic, the ravens don't have as much to eat. The survivors have taken to scavenging at picnic sites and tourist spots.

Where to see them

Most visitors hear the ravens before they see them. Their characteristic honk is unmistakeable although they do make a wide range of squeaks and bubbly noises.

You often see ravens close to Roque Nublo and a group hangs around Pico de las Nieves surfing the thermals and winds that blow off the rocks. We've seen as many as 15 at one time playing in the wind at Gran Canaria's high point.

There's also a resident raven at the Mirador El Balcón between La Aldea and Agaete on the GC 200 road. We've even seen them hanging around the bins on the south coast by Pasito Bea and Montaña de Arena beaches.

When you see a Gran Canaria raven, spare it a thought. The world's most intelligent bird may not survive here much longer.

We have 3227 guests and no members online