The Gran Canaria Cathedral: Why It's 500 Years Old & Still Unfinished 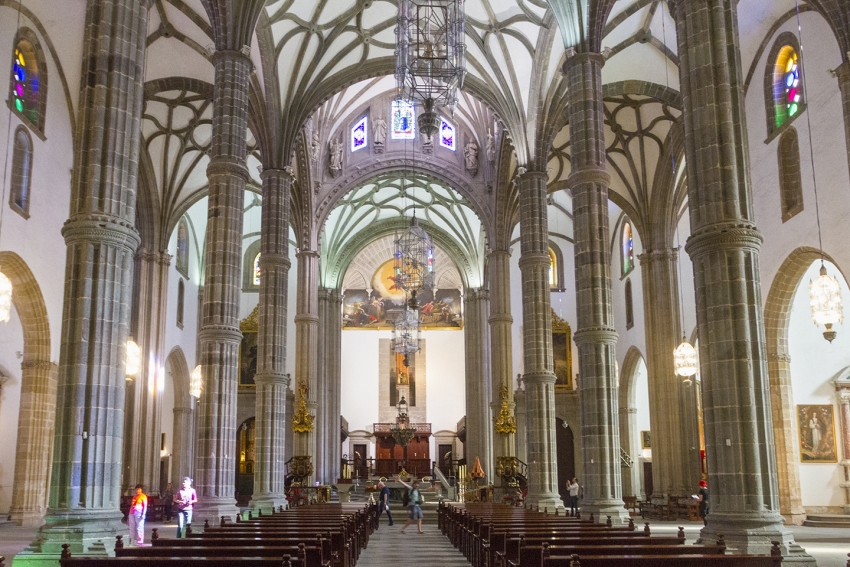 The interior of the Santa Ana cathedral in Las Palmas www.photosgrancanaria.com

Gran Canaria's only cathedral is a mishmash or architectural styles because it was built over 500 years.

Plans for Santa Ana cathedral started in 1487 just five years after the Spanish defeated the island's original Canarii inhabitants (and before Tenerife had been conquered). Building started 10 years later and still hasn't finished.

The cathedral's history reflects the boom-and-bust economy of the canary islands in the last 500 years. Every time the islands had lots of money, from sugar cane, wine, cochineal, bananas or tourists, bits were finished and added on. When the money ran out, work at Santa Ana stopped.

The effect of this stop-start construction is that the different bits of Santa Ana are built in the style that was popular when funds were available.

The original design and initial early-16th Century construction phase were renaissance Gothic in style and modelled on the Seville cathedral. During this period, the facade was built and the main layout established. Then the money ran out in 1520.

Work started again 1533 and by the 1560s, the roof was on and the tierceron vaults, with their delicate stone ribs modelled on palm trees, in place.

The unfinished cathedral was inaugurated in 1570 and the subsequent collapse of the sugar cane industry and Dutch Admiral (pirate if you are Spanish) Van Der Does' sacking of the entire city in 1599 led to a quiet century on the cathedral-building front. Pretty much the only 16th Century addition was the Patio de Los Naranjos, now home to the sacred art museum.

Booming trade with the Americas meant that the money started flowing again in the second half of the 18th Century. This is why most of the Cathedral exterior is neoclassical rather than gothic; It wasn't built until after 1770.

Parts of the cathedral were never built; Look north from the roof and you can see the empty space where further chapels and churches were planned.

Everybody who visits Vegueta walks around the Santa Ana but you can also get on the roof and inside the cathedral itself.

Access to the roof is via the front of the cathedral (west). It costs €1.50 and we'd advise you to take the lift up and walk down. You can walk on the roof section just above the main facade and also climb up the south bell tower. The views of Vegueta's rooftops and the hill barrios of San Juan and San Jose are excellent and the white roof of the cathedral contrasts with the blue ocean to the east. To the north, you see ll the way to the Puerto de la Luz with its oil rigs and cruise ships.

To get inside the cathedral, either turn up for mass and be prepared to sit down and be solemn, or pay €3 to go into the Museo Diocesano De Arte Sacro (door on the south wall). This gives yo access the pretty Patio de Los Naranjos and its collection of religious paintings, silver and gold work and carvings. Highlights include the mesa de los perros with its legs modelled on podenco hounds and carvings by Canarian master Lujan Perez.

The real benefit of going to the museum is that you can walk into the cathedral and explore. The interior is austere construction but the delicate ceiling work sets off the huge pillars and largely bare walls.

Most of the artwork is in the six side chapels and the vast altar area.

On sunny mornings, you get pretty patches of coloured light on the columns and floor. Art buffs will want to look out for Lujan Perez's carvings and the Dutch can marvel at the clock at the back.

Alex says: For a macabre moment, head to the chapel in the southeast corner and say hello to the mummified bishop in a glass box.

We have 3101 guests and no members online