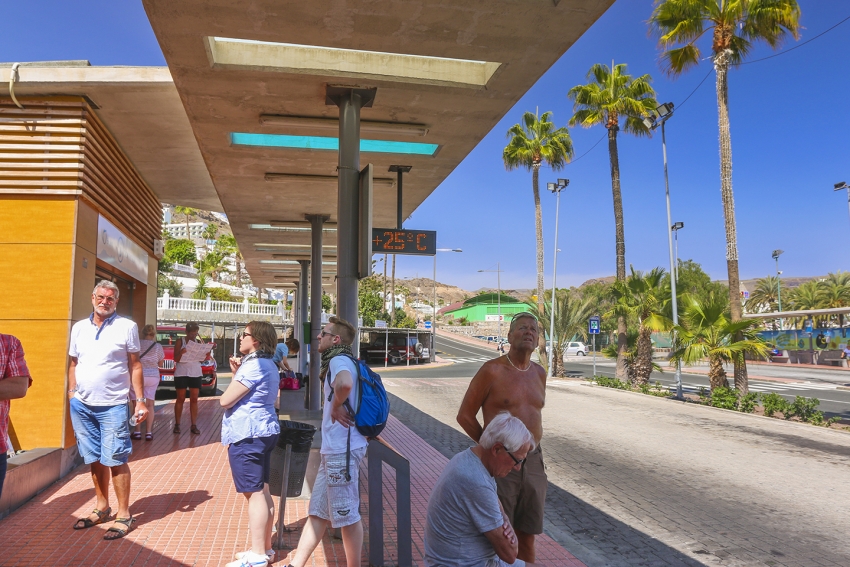 Local bus travel from Puerto Rico resort is easy: Just go to the bus station in the centre of the resort, pick a blue bus and pay on board.

For discount fares, buy return tickets or day cards from the bus station. There's plenty of info available on boards and screens and the staff at the info desk are helpful.

Buses go regularly from Puerto Rico to all the other resorts on the island and further afield to Las Palmas. For travel up into the cumbres or to smaller local towns, you'll need to change buses at either Maspalomas bus station (called Faro de Maspalomas) or San Telmo in Las Palmas.

From Puerto Rico bus station, it's a short walk to the beach and to the shopping centre.A taxi to anywhere else in the resort costs less than five euros.

These are the most important bus lines that stop at Puerto Rico bus station: Check the timetables here.

Line 1 goes between Las Palmas and Puerto de Mogán. It's a great bus for getting to the little beaches between Puerto Rico and Mogán as it stops at Tiritaña and Medio Almud (no need for swimming costumes). For longer distances, Line 1 is a bit of a pain as it stops everywhere and takes a long time. In Las Palmas get off at San Telmo for Vegueta and Triana, and at Santa Catalina for Las Canteras beach.

Line 33 is the slow bus between Puerto de Mogán and Playa del Inglés. It uses the old coastal road and stops everywhere. Line 39 is similar but only goes as far as Playa del Cura rather than all the way to Mogán.

Line 70 gets you to Palmitos Park and back to Puerto Rico. The first one leaves Puerto Rico at 0.900 and the last one back leaves Palmitos at 17.15 (check timetable as times do change).

Line 91 is the fast bus to San Telmo station in Las Palmas. From here its a short walk to Triana shopping district and Vegueta old town, or a short taxi or bus trip to Las Canteras beach.

We have 2703 guests and no members online