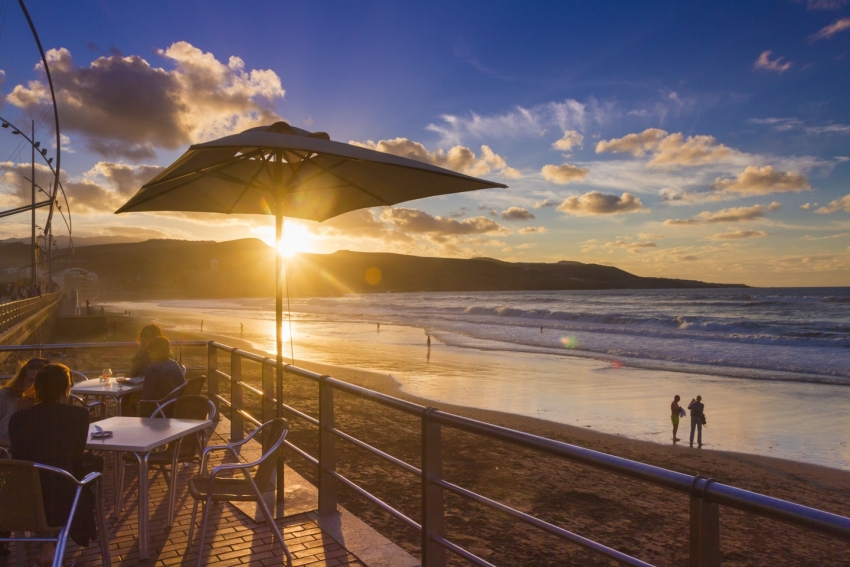 Las Palmas is a surfing city and the vibe is strongest at the south end of Las Canteras beach. These are the La Cicer spots where the locals and the learners hang out in between sets.

The only thing Las Palmas surfers love more than waves is good value grub and they go to Cafe Central to get it. Two blocks back from the main La Cicer break, it's been the top post-surf refuelling spot for yonks.

Arrive early or expect to wait in line for Central's legendary fajitas, burgers, and bocadillos. If you have to wait, there's local art on the walls to keep you busy.

Bosmedianos for a squid sarnie

Sometimes, you just need a bocadillo de calamares to line the stomach between surf sessions. Get one to go at Bosmedianos right by the La Cicer break. Order a squid sandwich or squid and chips for the beach at the bar, or sit down for a more substantial lunch.

Refined it ain't, but Bosmedianos serves good value and tasty calories right where you need them.

Just don't ask for garlic mayonnaise to go as bars in Las Palmas can't serve it with takeaway sandwiches: Something to do with egg juice, the hot sun, and serious bellyache.

Oh, and nobody calls it Bosmedianos. It's known as Los Ñoños.

Get your board at Mojosurf

There are a dozen surf schools behind the beach at La Cicer and they all do board rentals (foam for the groms, shiny for the pros) and surf lessons. We like Mojosurf because they organise a mass surfing Santa photo shoot Christmas. That's cool!

Rock out at NYC Taxi Bar

The Las Palmas live music scene has been driven back into the basement bars after the local residents got sick of rolling live music on the beachfront: Except at New York Taxi which still hosts live outdoor music every Friday evening.

The bar and even some of the tables are made of the black and metal cases that roadies lug around between gigs. The menus are printed on LPs. Janice, Jimi and Jagger stare down from the walls. Rock chicks serve the beers. Irony-free air guitar happens every night. Without fail!

NYC Taxi deserves kudos for keeping the flame of live music on the beachfront flickering, even if most of the bands play 1980's Spanish hard rock (you had to be there, man).

Ever wondered if it's ethical to celebrate the ocean all day long and then eat its inhabitants in the evening? Don't worry because the locals, even the scuba divers, are fine with it. If you want to pig out on quality seafood without moving too far from the waves, this is your spot. Nautilo does a great range of fresh fish and seafood with hints of fusion and experimental cuisine; it's even got a dish flavoured with plankton.

Let us know what it's like as we didn't dare order it.

Skip the animals at El Palike

If eating the ocean critters isn't your thing, then head over the road to Palike. It's 30 metres from the beachfront and serves up a decent range of Indian-style veggie food along with burgers and the odd pizza. Prices are great and the food is tasty.

Try the nan kima and the kulfi ice cream.

Ever bought a smoothie and wondered where the rest of it is? It won't happen at Smoothie Galaxy; it does juices on an epic scale and serves them in jam jars that are too big to hold in one hand (will the jam jar fad never end?).

Try the breakfast deal which is a vat of juice health served with banana, honey and sesame toast.

Five a day? You won't leave this Galaxy without getting a week's quota of vitamins in one sitting.

Quinoa quiche and veggie burgers served right on the beachfront? Naturalis is the place to go. It's the one with the tree hanging out of the window and the campervan painting on the wall.

A staple for Las Palmas' veggies and healthy food fans.

Plaza del Pilar is one of Las Palmas' most lively squares and it's where the barrio's kids go to blow off steam while their parents chat and drink beer. It's not exactly pretty, but El Pilar is still solidly local and has a good selection of cafes and bars. The local entertainment committee is almost overactive and puts on concerts, fairs and fiestas at the drop of a hat.

We're not sure why, but Tiramisu cafe is cool. It serves cake, but not it's namesake, along with all the cafe staples and just seems to attract funky people and their dogs.

Tiramisu is on the corner of Plaza del Pilar closest to the beach. It's only got a few tables but they are almost always full. Another spot that does live music at weekends.

¡Oh! Que Bueno is one of our favourite Guanarteme bars because the staff and owners are friendly, it puts on the rugby in a football-mad city, and does spectacular arepas. With plenty of tables and a good range of gintonics, cocktails and beer, this is the Plaza del Pilar's busiest and bar. We call it the local.

We have 1953 guests and no members online