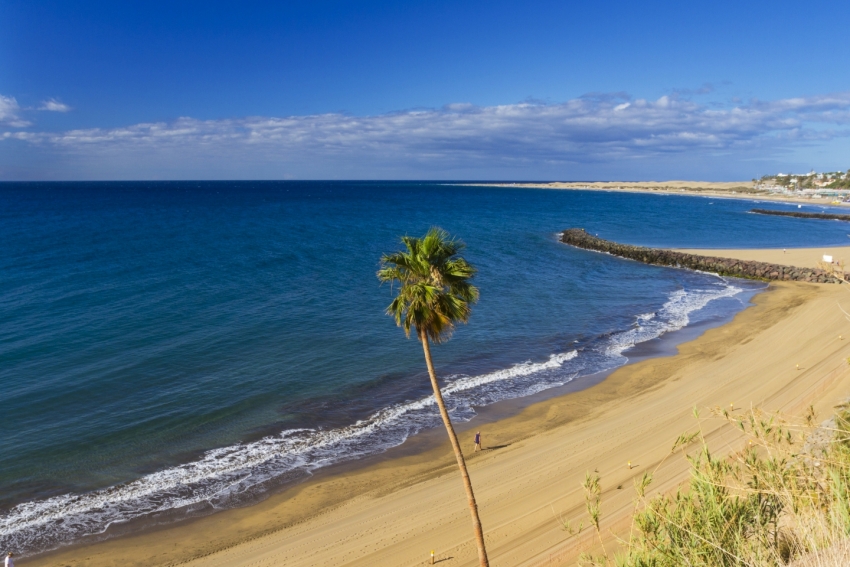 Gran Canaria has dozens of beaches, from the Saharan splendour of Maspalomas to the tiny patch of sand at Sardina del Norte. Some are packed with sun loungers and parasols, while others are hours away from the nearest Full English Breakfast. Whatever your taste, the island has the perfect beach for you. 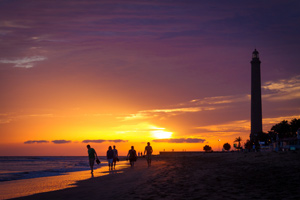 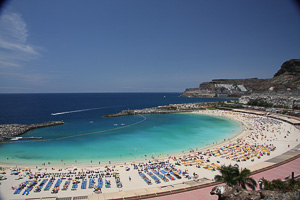 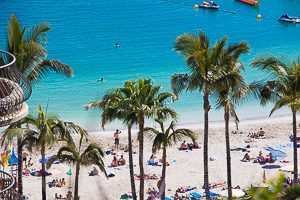 Anfi is another gorgeous artificial beach and was built by the company behind the enormous Anfi Timeshare complex that overshadows it. Originally Anfi Beach was meant to be a private beach for Anfi customers but Spanish law forbids private beaches so everybody can use it. Coming from Maspalomas and Arguineguin, Anfi is just before Puerto Rico resort on the GC 500 road. Park in the carpark on the opposite side of the road and walk down to the beach. It has shops, bars and restaurants. 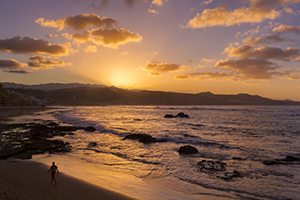 Las Canteras Beach is probably the island's most underrated beach. It is 3.5km long and sits right in the middle of the city of Las Palmas. Sheltered by a lava rock reef, it is safe for swimming and made of gorgeous golden sand. The snorkelling here is great because the whole beach is a marine reserve.
We can't recommend Canteras enough: loads of space, local bars and restaurants, surfing at its southern end, and a completely local feel. If you fancy getting out of the resorts but still fancy a day on the beach, Las Canteras is the place for you. 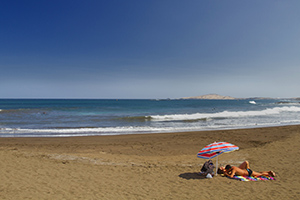 Melenara Beach is the local beach for the Town of Telde. It is dark yellow in colour, and well maintained, with local restaurants on its promenade. Next door is another, similar beach called Salinetas. If you are staying in Las Palmas and it's cloudy, Melenaras is the first beach you get to that is likely to have sunshine.
To get to Melenara and Salinetas, turn off the motorway at the old Ikea, head down to the coast, and then head north until you get to the beaches. 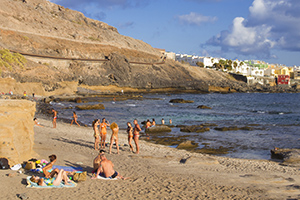 El Confital is Las Palmas' most pristine, natural beach. It used to have hundreds of illegal houses but they have been removed, and the beach and surroundings left to return to nature. Confital is mostly rocky, with a few patches of golden sand. It is nudist from the end of the wooden boardwalk.
El Confital is also home to one of the best tube waves in Europe but don't jump in without some experience as the wave breaks shallow over a lava reef and the locals don't like grommets getting in their ways. 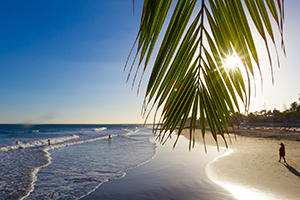 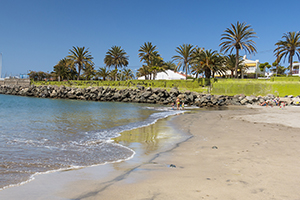 The beach where the have-yachts and the have-nots share the sand. Access to Pasito Blanco beach is from within the posh Pasito Blanco marina. You can only drive in if you own a boat or a property in the harbour but you can park outside the gate and walk in, or get a bus.

The beach is a long stretch of pale sand and is one of the emptiest in south Gran Canaria. Snorkelling at the east end is excellent and the water here is almost always safe for swimming. 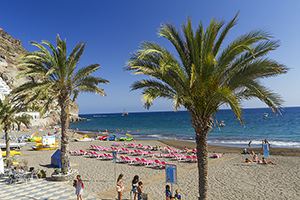 Taurito resort is a little world of its own in south Gran Canaria. With lots of palm trees and a water park just behind the beach, it's the island's most complete mini-resort.
Its beach, made of dark, natural sand, is a bit wavier than others in the area but has a fringe of palm trees and restaurants right on the sand.
Somehow it feels wilder than other south Gran Canaria beaches and has a rugged, Caribbean feel. 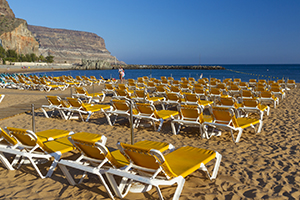 Puerto de Mogán's golden beach, a few paces from the famous marina, is as sunny and sheltered as it comes and a great family option. There are plenty of places to eat right by the sand or you can walk over the canal to the marina for lunch by the boats.
The water at Playa de Mogán is warm and calm and there are pedalos and SUP boards to rent on the sand.
For snorkelling, head to the far end of the beach and jump in off the shingle. 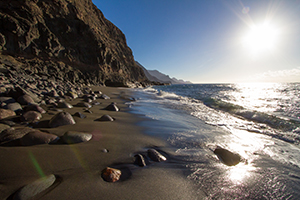 Guayedra is north Gran Canaria's locals' local beach. Set in a valley full of palm and mastic trees and just one farm, it's one of the island's most pristine spots.
The beach is a mix of pebbles and volcanic sand and is just past Agaete on the amazing West Coast road. It's hard to get to as you have to drive down a track, park up, and then walk down to the beach. During the week, you'll probably have it all to yourself, except for the odd group of nudist campers. At the weekends, it fills up people from Agaete, Galdar and Guia.
Guayedra beach changes depending on the waves and currents. Some days there's big sandy patches, others it's all pebbles. Take care in the water if the waves are big. 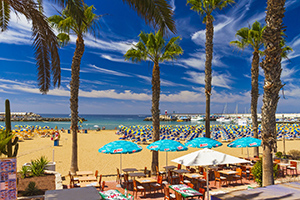 Puerto Rico beach is buzzes almost every day but is pretty enough to get away with being crowded thanks to its promenade and beachfront restaurants.The sand is safe, calm and clean and there are plenty of loungers and parasols to rent.
This is the resort beach experience and is sunny almost every day of the year. For a quiet Puerto Rico beach experience, stay on the sand as the sun sets and you'll be left alone. 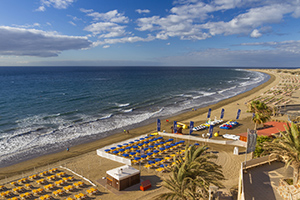 Right next to Maspalomas beach (they are actually the same stretch of sand) Playa del Ingles beach is probably Europe's busiest but is so long that you can always find a peaceful place to sit.
The area at the end by the big dunes is nudist and the water sports centre is tucked into the east corner.
For food, head to thew Annexo II strip of restaurants just behind the north end of the beach. 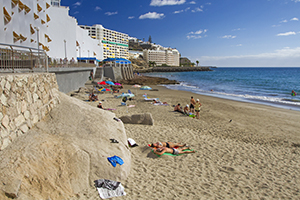 This is the south Gran Canaria beach that the Scandinavians quietly keep to themselves. It's just a few minutes walk along the shore from Anfi beach but is natural and doesn't get the crowds.
With golden sand, a pretty promenade with restaurants looking out over the beach and a laid back feel, Patalavaca is always worth a visit. Look out for the tiny little beach in the central rocky section: It's great for photo. 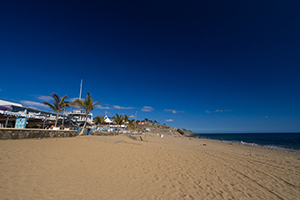 Meloneras is Maspalomas' other beach. With golden sand and a few pebbles, it's a lovely spot that gets overshadowed by its big brother just along the coast.
The beach is right at the west end of the Meloneras promenade that goes past the big hotels like the Costa Meloneras and Villa del Conde.
Meloneras beach is rarely busy, but has loungers, plenty of sand, and restaurants. If Maspalomas beach is windy there is a good chance that Meloneras won't be. 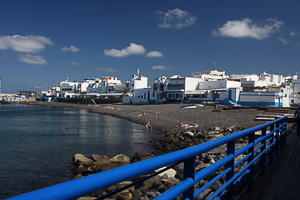 Puerto de Las Nieves is a little fishing village in the north west corner of Gran Canaria. It has some lovely fish restaurants and is the departure point for the fast ferry to Tenerife. It has two beaches, both pebbly. One is in the harbour and the other is the far side of the village's old quay. The harbour beach as the best atmosphere.
Sadly for Puerto de Las Nieves, its iconic Finger of God lost its finger during a big storm a few years ago. You can still see the remaining knuckle of god by looking towards the cliffs from the quay. 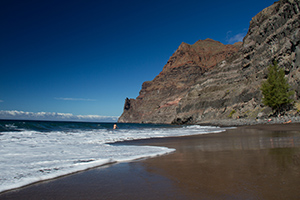 Gui Gui or Guigui Beach is Gran Canaria's most famous remote and unspoilt beach.
It's a three-hour hike across pristine countryside from the nearest road and is nudist.
If hiking sounds like too much hard work you can take a boat trip from Puerto Rico that includes a stop at Gui Gui. You won't get long on the sand but at least you'll have seen the legend. 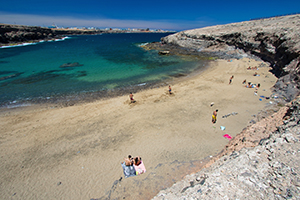 Most beaches on Gran Canaria's east coast are black volcanic sand but pretty Aguadulce is golden. It's only small but the golden sand, pristine condition and turquoise water make it a special spot.While it can be windy during the summer, it's idyllic on calm days. Despite the sand crystal clear water, Aguadulce only gets a few bums on towels on an average day.

While it can be windy during the summer, it's idyllic on calm days. Despite the sand crystal clear water, Aguadulce only gets a few bums on towels on an average day.

Aguadulce is clothing optional and nudists tend to cluster by the little cliff at the east end of the beach. 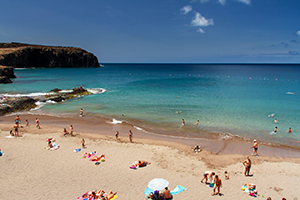 Little Sardina del Norte fishing village in north-west Gran Canaria is famous as a dive site but it's little golden-sand beach is a stunner. It faces south and gets the same sunny weather as the Agaete Valley so it's always a good bet for sunshine.

Sardina is home to several excellent local seafood restaurants (Canarians divers thing nothing of admiring the marine life and then eating it straight afterwards).

We have 3957 guests and no members online