The Top Ten Gran Canaria Fiestas You Have To Experience 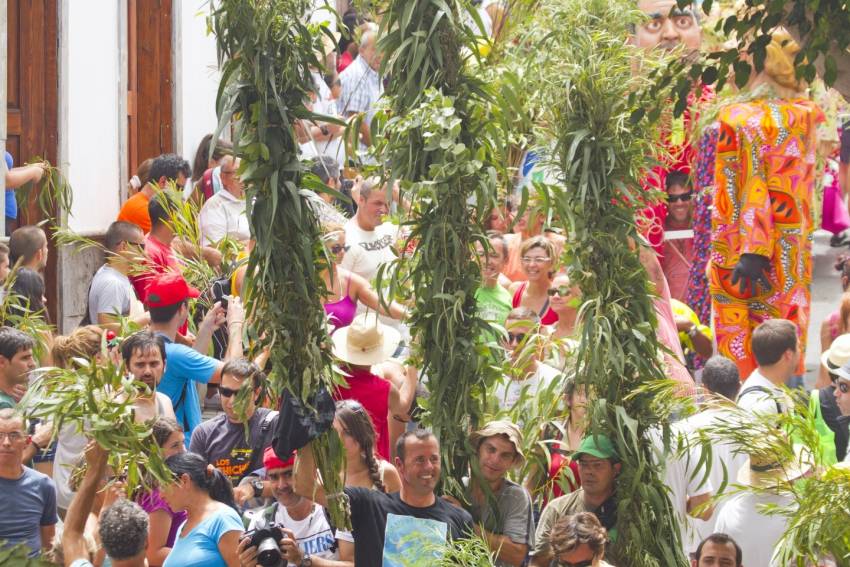 La Rama in Agaete is amongst the top Gran Canaria fiestas

Gran Canaria is an island that knows how to party. And it does so in its own way. Rather than the dance music parties of the Balearics or the bull fests of Spain, Gran Canaria goes local with its fiestas.

Here're the Gran Canaria fiestas you have to experience.

Carnival in Gran Canaria is one of Europe's biggest celebrations and lasts for the whole of February. The two biggest fiestas are in Las Palmas and Maspalomas, but every town has its own parade and party.

With drag queens, parades, drumming and body painting competitions, pet processions and lots of men in skirts, carnival is Gran Canaria's homage to getting dressed up and having fun in the sun.

Fishing villages all over the island celebrate the Fiestas del Carmen, but the biggest fiesta is in Arguineguín and Mogán. The celebrations last a week, but the main event is a boat procession between the harbours.

Every year the Virgin Mary Icon in Arguineguin town takes a sea voyage and is reunited with her twin at Puerto Mogan. She is accompanied by hundreds of boats from ferries to little fishing caiques. It's the biggest fiesta in the south of Gran Canaria along with the Maspalomas carnival.

Alex says:  To bag a place on the ferry boats head down to the Puerto Rico, Mogán or Arguineguín marinas a few days before the procession and book.

The Lomo Magullo traida de agua or water carrying fiesta in Telde is all about splashing and getting splashed. Thousands of people carry water in procession through the municipality before using it for a huge water fight.

Lex says: Lomo Magullo is great fun, but it's not the place for cameras and mobile phones. Take a spare set of clothes in a plastic bag.

A sea of people fills the steep lanes of Agaete town, dotted with huge papaguevo figures with papier mache heads. Everybody carries fresh green branches brought down from the mountains. By the end of the day the procession reaches the sea at Puerto de las Nieves. The crowds beat the sea with the branches to encourage the rain.

The La Rama tradition is said to be one of the oldest in the Canary Islands. The myth is that it dates back over 1000 years to prehispanic times when the island's original inhabitants, known as the guanches or the Canarii, worshipped mother nature and their high priestesses used to beat the sea in times of drought.

The truth is that La Rama was invented by an enterprising mayor a few decades ago to get people to come to town and spend money. While there were Canarii priestesses at Agaete, there no record of any sea-beating anywhere in the ancient chronicles.

But hey, let's not let that get in the way of a good party.

Around 70,000 people come to La Rama in Agaete town in the north-west of Gran Canaria. The procession winding through Agaete's white houses is unmissable if you are in Gran Canaria at the beginning of August.

La Aldea de San Nicolas' annual fiesta is another one that dates back to prehispanic times. The main event is a mad dash into a lagoon: Thousands of people race to catch as many fish as possible with the winner becoming king for the day.

Many people hit the lagoon in full traditional dress: This is because the island's bishop once said it was sinful to run into the water topless.

If you want to take part here's a tip: Take a bucket or basket to scoop up fish, or use your t-shirt as a net.

Bioagaete is the newest fiesta in Gran Canaria and the closest the island gets to a proper music festival. It started a few years ago after Las Palmas cancelled WOMAD and has grown into the island's biggest and best music festival. Stages are dotted all around Puerto de Las Nieves and Agaete and there are craft and environmental activities for kids and adults.

Local and Canarian bands provide the music and the whole show is run by volunteers from the area. For a fun day out with great music head over to the north-west in late August. Check their website for more information about the exact dates etc.

Gay Pride in May

Gran Canaria's pride parade is the biggest LGTB event in the calendar. The parade runs right through Playa del Ingles resort, but the party in the Yumbo Centre lasts for a week.

Pride is a celebration of Gran Canaria's relaxed and tolerant way of life and is damn good fun for everybody.

A religious festival with the focus more on traditional fun than god, the Fiestas del Pino in Teror are a celebration of the island's patron saint and its traditional music, food and dance.

People walk through the night to arrive in Teror for mass and then spread out through the old town to do what Canarians love most: Eat, drink dance and sing. They don't stop until the buses home start beeping their horns.

Crowds gather and head up the hill to the old clay deposits before heading back to the village and getting messy. Mud gets everywhere and it's another local fiesta in Gran Canaria where you need a change of clothes. The party goes on into the night with live music and there's horse races the next day.

Almonds are the soul food of the Gran Canaria highlands and this Tejeda fiesta celebrates the blooming of the wild trees scattered all over the hillsides. It's a local event with lots of Canarian music and dance and all sorts of almondy treats. There's even a "Tourist Day" with buses laid on from the resorts.

We have 414 guests and no members online