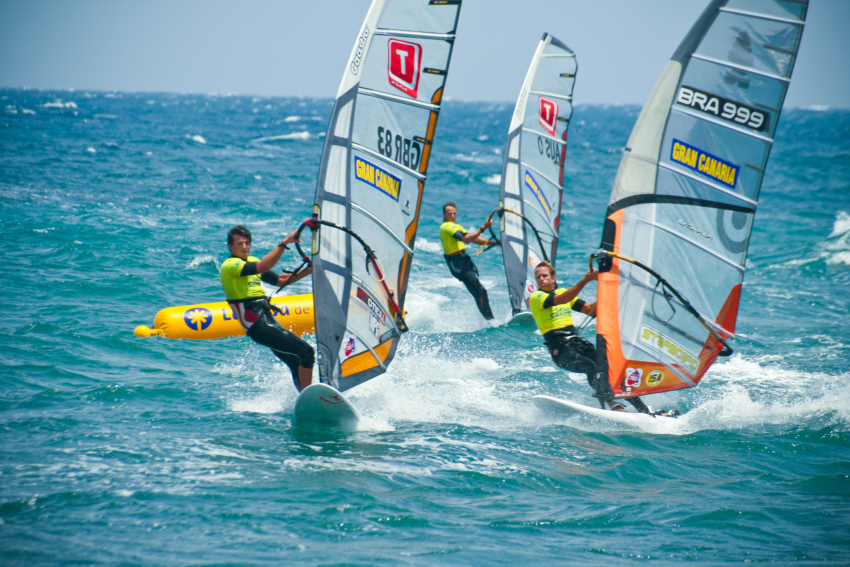 The east coast of Gran Canaria is a world-class windsurfing area but on the right day, there are quality sailing spots all over the island. Here's our guide to all the best spots for windsurfers and kitesurfers.

If you want to learn to windsurf in Gran Canaria, or rent your equipment, just go to Pozo Izquierdo town!

Pozo Izquierdo is the centre of the Gran Canaria windsurfing and kitesurfing scene and the best schools are based here thanks to the constant conditions and sailing culture. There are also schools in the south around Bahia Feliz but there are lots of flat days here.

Pozo is also the place to go for Gran Canaria windsurf rental as the windsurfing shops and schools here have the best choice of equipment and can offer you the best local tips on where to go.

Any guide to Gran Canaria windsurfing has to start in the east as this is where the consistent Trade Winds accelerate and produce the best and most consistent conditions.

Kitesurfing at Media Luna and Bocabarranco

These mixed pebble and sand beaches on the shore in front of the Las Terrazas shopping centre are for experienced kitesurfers. Conditions here are treacherous due to the gusty winds,  strong waves and currents. Best with NW winds at mid tide.

Do not swim here as the waves are dumpy and the current downright dangerous.

This sandy beach is right at the end of the north tip of Gran Canaria's airport so you f¡get to watch the planes take off every few minutes. Take care of drifting too far south as the area past the beach is a restricted military zone.

The best winds at Ojos de Garza are N and NNE, but NE is good, especially when Pozo is howling; locals use Ojos de Graza when Pozo is too strong.

The wind here is side-shore or side-onshore, and there is sometimes a decent wave riding break near the beach. Further out to see out of the shelter of the bay the waves get bigger and more onshore and are decent for jumping.

Take some care at Ojos de Garza as the wind gusts and you run the risk of hitting the rocky zone south of the sandy launch point. Nobody wants to end the day having to choose between hitting an urchin-riddled reef or getting picked up in a military jeep.

To get to Ojos de Garza, turn off the GC1 at the Gando-Ojos de Garza exit and then park up in town (parking is tricky, especially at weekends) for a beach launch, or take the track down to the rocky shore just before the military fence.

This long stone beach is windiest at the south end and there is even a sheltered, sandy bit at the north tip where you can park the family. Access is via Carrizal town and there is parking close to the beach.

The best wind at El Burrero is NE and side-offshore. It tends to be a little lighter than at Pozo Izquierdo. Wave riding conditions are good when there is a big northern or NE swell but the break is too close to the rocky shore for jumping.

The beach at Vargas is stony although there is a strip of sand at low tide. Conditions are similar to Pozo but the wind tends to be lighter and the wave a little bigger.  Take care at high tide as the waves break right onto the stony beach.

The beach is long and has zones: Swimmersstick to the left, windsurfers in the middle and kite surfers in the south where the waves are at their biggest.

To get to Playa de Vargas, turn of the GC 191 between El Carrizal and Cruce de Arinaga. There is plenty of parking right by the shore and a campsite just inland that is used to catering to sailors and surfers.

A small bay with a mixed sand and stone beach with no waves thanks to the shelter from the Arinaga harbour just to the north.

The wind here is as strong as in Pozo Izquierdo but gustier with the trade winds (NE). It is at its best when the wind turns a little bit to the east.

Salinas de Arinaga is a good place for beginners but it's best to stay within the bay.

To reach Las Salinas de Arinaga, take the GC 65. Parking is by the shore and fine during the week but can be tricky at weekends.

The left-handed wave at Mosca Point with side-offshore wind is only worthwhile if it's big (normally with N or NE during the winter).

The shore is shallow and rocky so take care when you ride the wave or you'll end up on the rocks; most people sail here from Pozo.

This stony beach on the SE coast of Gran Canaria is at its best between May and the end of August, but offers good conditions almost the whole year. Conditions are best at mid-tide.

Between February and May, and September to November, the wind is lighter and less regular but the waves tend to be at their best.

Pozo (as all sailors call it) is ideal for jumping.

You need some experience to start of the beach as the rocky shore can damage equipment, especially at high tide. Pozo can get crowded during the summer

To reach Pozo, take the “Vecindario-Pozo Izquierdo” exit from the GC 1 and then the road towards the sea. Parking is right by the shore.

A stone and rock beach just south and downwind from Pozo that is popular with kite surfers (take care getting into the water as the urchin-riddled rocks can be vicious). Most people start at Pozo and just sail south.

The NE at Salinas de Pozo is side-shore and as strong as in Pozo Izquierdo. It offers good wave riding, but the break is close to the shore.

It’s an easy place to find, but you have to be careful with the car on the dirt road because of some big stones.

Take care at high tide as the wave rebounds off the shore and the rocks have urchins at low tide.

Juan Grande tends to be at its best in the mornings.

A continuation of the beach at Juan Grande. The dirt road is worse than the one to Juan Grande, but the wind is a bit better, and getting in and out of the water is easier with less urchins.

This spot is popular with local kitesurfers when the wind comes from the south. The best entry point is from the beach by the harbour

The waves here at not always that large but tend to be clean.

There are good local places to eat just behind the beach and a vast if dilapidated shoreline swimming pool in the little town.

Named after the sauce factory close to the shore, this spot, just west of Castillo del Romeral, is good with southerly winds in the winter but otherwise tends to be fairly flat.

Gran Canaria's south coast is sheltered from the Trade Winds and the spots here are not consistent.

If you want to combine your windsurfing with a family or beach holiday, Bahia Feliz is your best (if not only) choice.

It’s a good place for beginners as the water is calm and the wind tends to be light. During the summer it’s normally light thermal winds from the S or sometimes the light end of the trade winds (NE). In the winter the E is stronger.

Playa del Aguila is the beach next to Bahia Feliz with similar wind conditions but often a bit more swell, especially when the wind is from the east.

Playa del Inglés/ Maspalomas is a long sandy beach right at the heart of Gran Canaria's biggest tourist resort. It's one continuous beach and the best conditions at the dogleg half way (three kilometres) along. Expect to pay for parking at either end of the beach.

Conditions are only worthwhile during the winter but the beach is almost always heaving with sunbathers. With strong west winds and a southern swell, the wave-riding can be excellent.

Right in front of the Faro de Maspalomas lighthouse. Windsurfing is fine here but the police have been known to chase off kitesurfers.

On rare days with westerly and even north-westerly winds this spot can produce some of the best waves on the island. However, it happens so rarely, and you have to sail upwind against the current, that the spot is little-known except amongst locals.

Gran Canaria's north coast is where surfers and bodyboarders reign supreme but on the right day the wave-riding can be legendary.

Galdar is up in the north-west corner of Gran Canaria and the drive from the GC 2 road down to the shore is through banana plantations.

Winter is the only season when this spot fires and a combination of westerly winds and N or NE swell yields the island's biggest waves. The shore is rocky and the waves powerful so this is a spot for specialists who are comfortable with mast-high waves and difficult entry.

This beach-break is a good option on calm winter days and there are monster waves at the reef breaks called El Picacho and El Paso 1.5km to the west.

Gran Canaria windsurfing along the rest of the north coast

With westerly wind there can be good wave-riding conditions along the north coast between Quintanilla and Vagabundos. The waves here are ocean swell rather than wind generated and tend to be bigger and more powerful than they seem. Have a good scout about before you choose the right spot on the day.

Puerto de las Nieves attracts some local windsurfers on NE days due to its shore break just north of the harbour wall. The shore is strewn with equipment-smashing rocks and the wave breaks close to them.

Even Las Canteras beach sees a few local kitesurfers on really rough winter days. Experts have even been known to jump the reef.

We have 339 guests and no members online