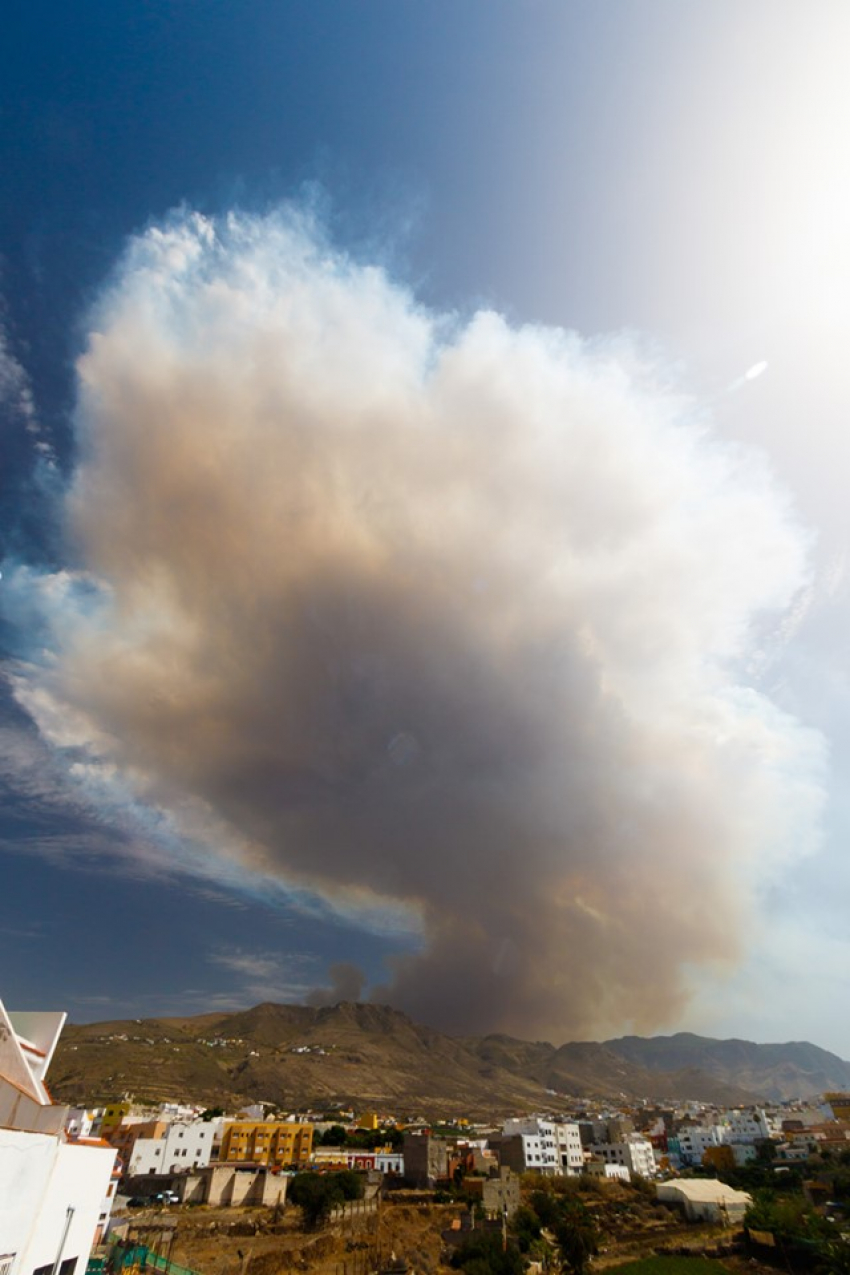 Gran Canaria forest fires are spectacular events but the island is well-prepared to deal with them and most are extinguished before they get out of control. Tourists and visitors are not at risk as Gran Canaria wildfires happen up in the mountains a long way from the resorts and the airport.

There are three causes of forest fires in Gran Canaria.

The first cause is nature; very rare natural fires are caused by lightning strikes or sparks caused by rockslides. There hasn't been one for decades.

The second cause is human mistakes; fires started accidentaly by people. They are much more common. Most are caused by people starting small fires to clear land or burn rubbish. Others start due to sparks from barbeques and welding (like the recent fire close to Artenara). Others start due to bottles left in the forests, discarded cigarettes, and sparks from offroad vehicles hitting rocks.

The huge 2007 forest fire was started by a fire warden who was worried that there hadn't been a fire for several years and that he would lose his job.

Why do Gran Canaria forest fires get so big?

Most fires in Gran Canaria don't get out of control. However, when a fire gets into the forests or mountain scrub at specific times of year and during extreme weather conditions it can turn into a big fire.

There is a basic rule of forest fires in areas like the Canary Islands and California that is called the 30 Rule. Any fire that occurs when the the temperature is above 30ºC, the slope of the angle of terrain is over 30% and the windspeed is over 30kmph is virtually uncontrollable.

Unfortunatley, these conditions occur frequently during the summer months in the highlands of Gran Canaria and is why some fires in Gran Canaria get out of control even though the island is on high alert.

There are two main reasons for the size and speed of Gran Canaria wildfires. The first is that they almost always start in the summer when temperatures are high and the wind is strong in the mountains. Once a fire starts it spreads fast.

The second is that Gran Canaria's pine forests have evolved to survive forest fires by burning fast. When Canary Pines burn, their needles burn fast so that their trunks and buds are not damaged by the flames. This causes spectacular flames and fast moving fires but means that the trees don't die. This is why the island's forests recover so fast after a seemingly catastrophic fire.

10 years after the huge 2007 fire it is almost impossible to tell which areas burned. Even the natural areas damaged by the forest fires during summer of 2019 will be well on the way to recovery after a wet winter.

When a rural fire in Gran Canaria detected it is labelled a level one fire and local firefighting teams rush to put it out. Almost all of the dozens of fires that start in Gran Canaria's rural areas every year are put out before they spread. If a fire gets out of control it becomes a level two fire and the Gran Canaria government takes over. It then calls in support from fire-fighting teams all over the island and can ask for hydroplane support from mainland Spain.

Because of the rugged terrain and steep valleys, most firefighting work has to be done by people on the ground with support from helicopters dropping water collected from reservoirs and special water tanks dotted around the highlands. The hydroplanes are a big help with large fires but can only recharge their tanks in the sea so are not as effective as a team of helicopters.

Because of Gran Canaria's terrain and natural vulnerability to forest fires the local firemen and forestry organisations are experienced and effective and do a superb job of fighting wildfires on the island.

One mountain resident died during the 2017 fire that also burned parts of Cruz de Tejeda but fatalities and inuries are rare because the island has a well organised warning and evacuation system. Everyone who lives in areas vulnerable to fires is allowed to clear bushes and dry grass from a wide area around their homes so wildfires rarely burn houses in Gran Canaria's mountains.

When a major fire gets out of control and threatens a town or village there is an effective evacuation system in place and all locals know exactly what to do in case of a fire.

As a visitor, if you are in Gran Canaria's highlands and see a forest fire the best thing you can do is head in the opposite direction as fast as you can. If you find a fire, it is more important to report it immediatley than it is to put yourself at risk and try to put it out.

Alex Says: If you hear about a Gran Canaria forest fire during or before your holiday, you have little to worry about. The areas of the island vulnerable to fires are a long way away from the south coast, the airport and the capital city and there is no danger of them reaching the resorts. The only effect even a big fire will have on your holiday is that your tour of the highlands will be cancelled.

How can we prevent Gran Canaria forest fires

The main way tourists and residents can help to prevent forest fires is to be very careful when you are in natural areas. Don't drop cigarette butts, start camp fires or BBQs, or leave glass bottles behind.

When the temperatures spike during summer hot spells (when there is a yellow or orange alert) it is best to stay out of the mountains altogether. Partly because of the fire risk and partly because it isn't all that pleasant up then in 40ºC heat in the first place. Far more people end up in hospital in Gran Canaria due to heat exhaustion than fire injuries.

The island does need to do more to clear fallen pine needles, pine cones and dry scrub from areas vulnerable to fires. The pine needles used to be collected by local people to stuff matresses and to use as animal beddig but this tradition has died out.

It is likely that volunteers will be able to help with these tasks in coming years.

What can you do to help during a Gran Canaria forest fire?

The main thing you can do is stay away from the fire. This guarantees your safety and means that nobody has to stop fighting the fire to help you. It also keeps the roads clear so that the island's incredible firefighting teams are free to move around.

Because Gran Canaria is vulnerable to summer fires it has a highly organised and effective system of dealing with fires. There are teams of highly-trained firefighters based in vulnerable areas with their equipment ready, helicopters ready to take off, and water tanks that are kept full throughout the summer to guarantee that the helicopters can access water to drop on the flames.

How can you help after a Gran Canaria forest fire?

However, there is already an effective local system of looking after animals affected by wildfires (during August 2019, 50 local vets were mobilised and ready to head into the highlands within hours of the fire starting but fortunately they weren't needed). The local evacuation and suport system is also effective and thorough so it is very unlikely that locals will need charitable donations for things like food, clothes and schoolbooks.

That said, after major fires there are always people in need and a donation to registered local charities, or fundraising event affiliated with local charities that get help direct to those in need, will always be appreciated.

There is a local saying that summer fires are best put out during the winter. What this means is that the best way to prevent fires in Gran Canaria is to train locals to look after the forests, clear excess scrub and to manage arable land so that it doesn't burn during the summer.

The Fundación Foresta, a remarkable Gran Canaria-based charity, does a huge amount of work to protect Gran Canaria's forest. It's main aim is to reforest areas of the island that have lost their trees with the right kind of native trees, manage new and exisiting forests, train local people in forestry management and educate the island's children about the value of their forests.

Another valuable way Gran Canaria visitors can help prevent forest fires is to get up into the highlands and support the local economy. Feast on the local cheese, buy the island honey and wine, and eat in local restaurants that use local produce. This maintains the local economy and means that less land goes unmaintained and at risk of fire.

We have 287 guests and no members online