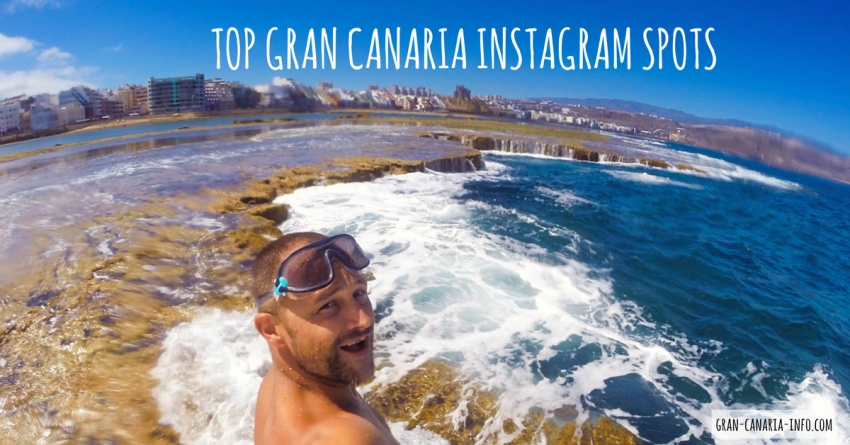 Taking great Instagram photos in Gran Canaria is all about being outdoors with the blue sky and the big views. Here's a list of spots where you're guaranteed to snap a keeper. 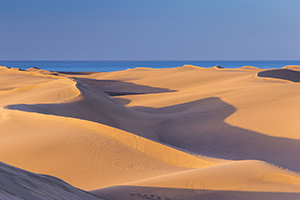 As close to a Saharan selfie location as you’ll get without actually having to schlep into the desert.

Get to the dunes at dawn for the best textures in the sand and the best chance of an undisturbed dune. They are at their best when it’s a bit windy as all the footprints disappear.

You can get a great photo from the Dunas Mirador at the end of Avenida Tirajana, but that’s where everyone goes. It’s much better to take off your shoes and hike into the dunes to find a fresh spot.

Once you've got your dunes photo, keep walking to the sea and get a great Maspalomas beach photo too.

This insane viewpoint hangs out over the sheer edge of Gran Canaria’s west coast sea cliffs and is over 400 metres above the sea. The views north, south and west, are spectacular and guarantee you a great Instagram shot.

To the north, you see all the way up the west coast to the little seaside town of Puerto de las Nieves. To the south, the cliffs drop into the sea in a rock formation called the Dragon’s Tail (you’ll see it straight away). And way out west, Tenerife island, capped by Teide volcano, stands out on the horizon.

Look out for the tame raven at El Balcón, but beware of the grumpy man in the food van. He doesn’t like people very much!

It’s a long drive to the Mirador del Balcón from the resorts, but it’s a must-stop spot on the GC 200 road up the west coast. Don't miss the multicoloured rocks at Los Azulejos along the way (just past the turnoff for Veneguera). 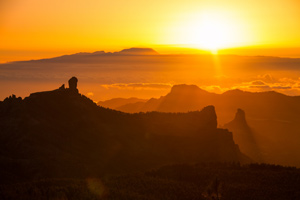 Get too close to Roque Nublo (you can walk right up to it) and it doesn’t fit in the frame even if you have a wide angle lens. However, Gran Canaria’s iconic rock is visible from all over the highlands of Gran Canaria. It’s a great focal point for Instagram shots and is instantly recognisable to anyone who has visited Gran Canaria.

To walk right up to Roque Nublo, and do cool perspective shots on the platform, park here and follow the path up the hill. It’s about 20 minutes from the road.

More on Roque Nublo & how to get there.

Whether you’re on a pedalo or a yacht, nothing says holiday like the deep blue sea. In south Gran Canaria you have a wide range of ways of getting out onto the ocean.

Go out dolphin watching and the chance of a selfie with a whale, or hit one of the party catamarans for hedonism and sunburn (often, the photos are the only memory you have). Or, choose a more sedate yacht cruise.

Budget tip: If you want the shot but don’t have budget for a big trip, get the local ferries. You still have a good chance of seeing dolphins and you see the whole coastline from the perfect distance for photography. 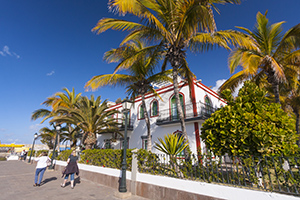 Puerto de Mogán, with its bougainvillaea arches, fishing boats and convenient arches, is the quintessential spot for a Gran Canaria Instagram shot.

The challenge is taking on that hasn’t been done before. If you can, head for the rooftops, or just lie down on the ground. One thing you can’t do is get into the water; swimming in the harbour is only allowed on one day of the year during the Fiestas del Carmen in July.

The key to getting a good photo of the Bandama de Caldera is to go at sunset or sunrise when the crater rim is lit up and long shadows give it a dramatic feel. During the day it all looks a bit flat, especially if you just go to the tip of the mountain and look straight down at the caldera.

However, you’ll get a good photo at any time of day if you walk around the rim of the crater (not difficult, but with steep drop-off at several points) or down to the crater floor (steep but easy).

The lazy option is to walk the first part of the path down to the caldera floor until you reach the first viewpoint. Then, walk back up and have a glass of the excellent Caldera wine from the winery by the gate. 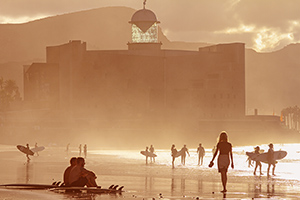 The two best bits of Las Canteras for Instagram photos and selfies are the northern and southern tips. The north end, called La Puntilla, is the postcard section with coconut palms and little fishing boats on the golden sand. The southern tip has the surf waves, sea haze, and the windswept trees.  To be fair, the bits in between aren't bad either.

If you really want an original shot, swim out to the reef at low tide and get a photo with the whole city in the background (where the title photo for this post was taken).

Whether you stand in the topaz-blue water or on the white sand, Amadores never fails to deliver a decent snap. It's worth arriving early as it gets busy during the afternoon and your backgrounds look a bit cluttered. Or stick around until late as everyone heads back to the hotel in time for their buffets and you get the sunset to yourself.

For a great photo with the whole beach in the background, walk the first section of the coastal path to Puerto Rico Resort. When you get to the top of the first hill, look back towards Amadores and smile.

Between the rum factory (think endless rows of barrels), the cobbled lanes and the vast Gothic church, Arucas is an Instagrammer's dream location. Start by walking around the church, then head down the high street and towards the chimney for a tour of the rum factory. Then head back into town for coffee on the cobbles.

Lex says: Walk up the hill behind the church for original views of the town. Or drive up to the top of Arucas mountain behind the town for great view of the whole north coast and its banana plantations.

It's a hairy drive to Fataga village but the route is seriously photogenic and Fataga village itself is the spot in south Gran Canaria to get a 'local day out' selfie. Stop on the GC 60 road at the Degollada de la Llegua viewpoint for a great photo of the island's rugged interior. Then head through the windy section of the road until you reach the palm grove at the bottom of the valley. It's worth getting amongst the palms here for a cool oasis photo. Then drive onwards until you reach Fataga village itself. The prettiest part is behind the church.

We have 439 guests and no members online