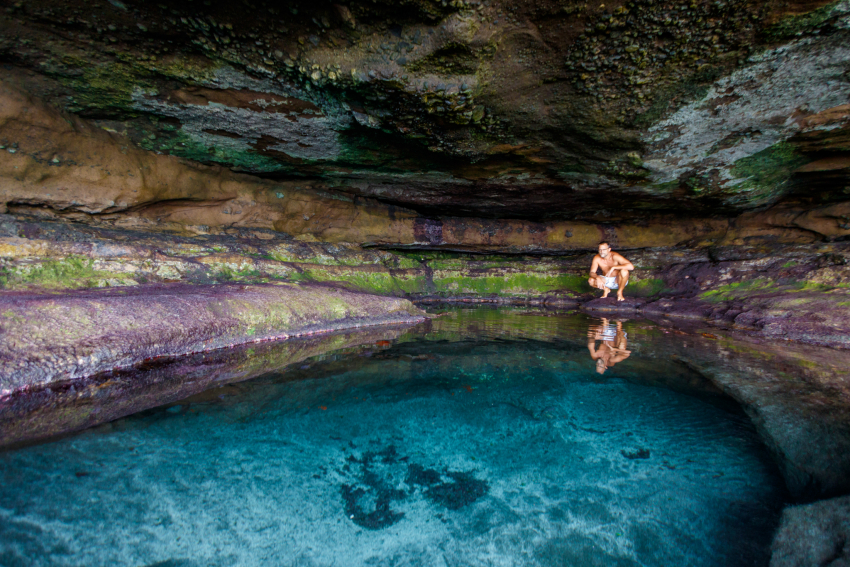 East coast La Garita has a wide and peaceful volcanic sand beach and a long coastal promenade that goes all the way to Playa del Hombre beach. The coast in between is rocky and hides a couple of beautiful natural features.

La Garita to Playa del Hombre along the coast 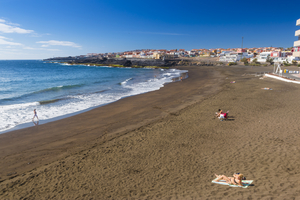 Start at the wide, sandy beach right in the middle of La Garita town. There's normally parking in La Garita close to the sea, especially if you visit at the weekend. Otherwise, start your walk at Hoya del Pozo beach as it has a car park just behind the sand.

From La Garita beach, head south along the promenade past the bronze statue of the divers. The coastal path is a kilometre long and ends just on a headland where Playa del Hombre town starts. To reach Playa del Hombre beach you have to cut back through the streets for about 250 metres. Head south and keep as close to the sea as you can and you'll soon find the ramp down to the beach. 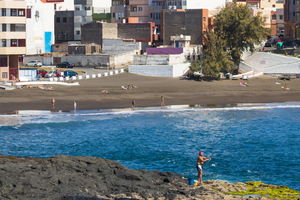 The only place to stop for a drink along the path is the Perico Junior restaurant just south of Hoya del Pozo beach. However, there are several local cafes behind the beach in La Garita town.

The promenade continues north of La Garita beach to the Punta de La Mareta headland. From here you can continue walking along a quiet road next to the cliff edge all the way to the string of three La Garita Norte beaches. 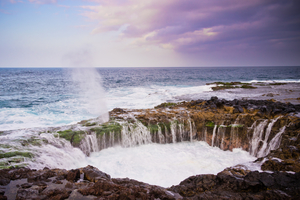 Well, you'll find it if you know where it is because you can't see it from the promenade. Look out for a tiny house on the rocks decorated with buoys and flotsam. The start of the path down to the blowhole is about 100 metres south. It's just a short scramble across the rocks and there are normally a few people there so you'll know exactly where to walk.

The Bufadero is actually a huge underwater rock arch with a deep, round pool just behind it. As the sea rushes in under the arch it fills the pool only to flow out again between waves. It actually looks and sounds like the heartbeat of the ocean. On rough days, there's a mini pool next door that shoots up a jet of water.

The best time to visit the Bufadero is at dawn because it looks stunning in the early morning light. However, it's pretty spectacular at any time of day.

Please be careful here as the east coast swell can be dangerous and the rocks are slippery.

Alex Says: We advise against swimming at any time because the water level goes up and down by several metres and its edges are sharp and slippery. 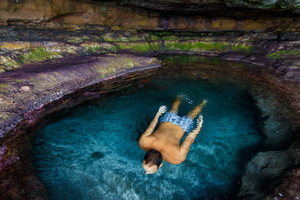 The Cave of the Moorish Queen is a small, little-known but quite beautiful cave north of La Garita beach and west of the Punta de la Mareta headland. The cave is about 10 metres deep and the walls are made of multicoloured lava. It contains two blue pools. The front pool, with colourful sponges on the walls and a sandy bottom, is big enough to jump in but you can't really swim. Please be careful not to stir up the pool if you get in.

In front of the pool, on the rock shelf, there's another pool teeming with blennies because locals fish off the top of the cliff and drop bread and bait into the pool.

The Cueva de la Reina Mora isn't signposted and there's no sign of it from the road by the coast. It's at the back of a narrow shelf at the base of small lava cliff. To reach it, you have to scramble down the cliff and walk along the shelf. 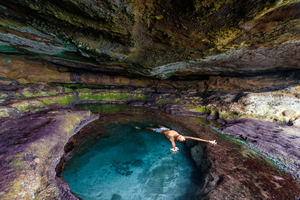 You can only do this at low tide and even then you should only visit on calm days. This is because once the waves break over the shelf they reach the cave and make it dangerous.

Where exactly is it? Well, we're not going to give you an exact map reference because we think it is safer if everyone who visits talks to the locals to find it. That way, they'll warn you if the sea is too rough to go down to the cave.

Getting to La Garita by bus

Blue bus lines 15 and 75  run from Las Palmas to La Garita. Both stop at a roundabout just inland from La Garita beach and also at the La Garita Norte beaches. There are no direct bus links between the resorts in the south of Gran Canaria and La Garita, although you can get a blue bus to Telde and a local La Pardilla bus to La Garita from there.

Swimming out of the Bufadero de la Garita. Something you shouldn't try to repeat. This was an exceptionally calm day. Normally, the currents are far too strong. www.photosgrancanaria.com