How To Drink Yourself Across In Las Palmas In Style 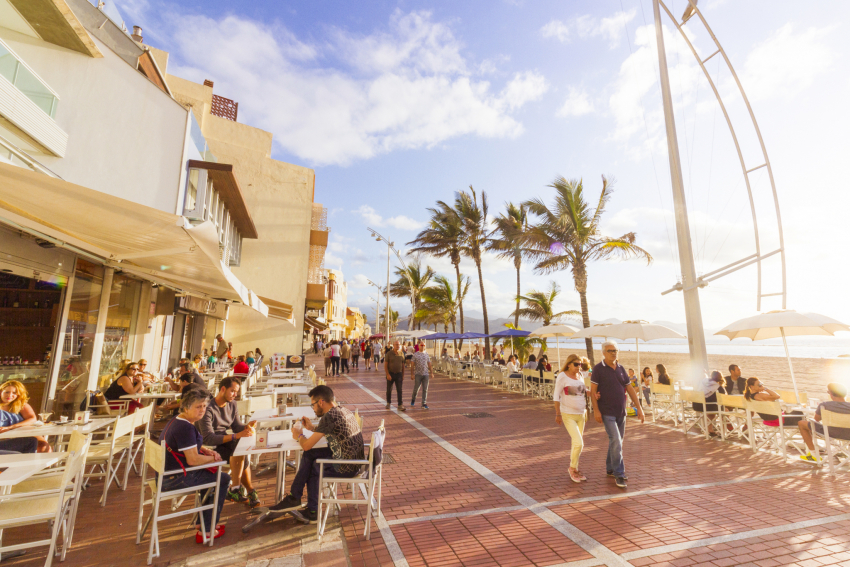 Las Palmas Guide: The best outdoor bars and nightlifespots in the city photosgrancanaria.com

Gran Canaria's capital Las Palmas is a big, bustling place and the outdoor nightlife is fantastic if you know where to go. Here's the Gran Canaria Info guide to a night out in the big city with no roof over your head.

Two secrets to drinking your way across Las Palmas in style

The first is that Canarians go out late and stay up late but don't actually drink all that much even though the local rum and cokes and G&Ts are really strong. A typical local night out starts at 22.00 with a few tapas or a light meal in a restaurant, followed by a couple of drinks in a bar, then a few hours of dancing at an outdoor terrace or a salsa club.

The locals handle going to bed at six in the morning because they drink steadily and never really get drunk.

The second secret is that if you stay just ahead of the local routine, you skip the queues completely.

Sit down to eat at 20.00 instead of 21.30 and even popular restaurants have free tables. Head to the bar at 22.00 instead of 23.00; there is no queue for drinks. Then walk right into the dancing club or the terrace at midnight instead of queueing at 01.30. Time it right and you can be home in bed just when everyone else is roaming around looking for a taxi.

Start at the end: The Las Canteras Beachfront

It's hard not to feel glamorous when you are right by the sand and the Las Canteras beachfront is where the locals gather for a sunset drink. The whole promenade is lined with beachfront bars with outdoor tables. The south end of the beach has a surfy vibe while the north end is smarter. Just north of the beach, along the coastal path towards El Confital beach, you'll find Bar Clipper (go on Sunday at sunset for live music)

For a good cocktail, head to Ginger right by the northern tip of the beach. Then head back from the beach, either to the Aloe Canteras Hotel rooftop bar or to the Mercado del Puerto; a grand old iron building with a thriving tapas and drink scene both outside and amongst the indoor stalls.

For some old-school vibes, stop at the Reina Isabel Hotel for a beer on their beachfront La Marina Terrace. It's like Raffles by the sea!

To continue the outdoor party in the Puerto, head to Plaza de Fray Junipero for a cluster of bars with outdoor tables, then to Kopas; a huge outdoor club at the base of the El Muelle shopping centre.

Start in the middle: The Muelle Deportivo

An alternative to the beachfront that keeps you close to the ocean is the Muelle Deportivo Marina right next to Alcaravaneras beach. There are bars in the Sotavento centre at the southern end and all along the quayside. The Muelle has a real boaty atmosphere as many people who drink here come straight off the boats; it's especially good when the yachts arrive in the weeks running up to the ARC Transatlantic Rally in November.

Eat at the Embarcadero restaurant (go early and see if you can bag a table on the decking terrace). Then get at drink on the terrace at Bahia Blue 21 at the base of the Sotavento.

Drink on at the Sotavento Club in the Sotavento, or over the road at the more chilled out Tao Club & Garden outdoor terrace and club.

Start at the other end: The Old Town

Swap the sand and sea views for the cobbles of Vegueta and the facades of Triana. Start in the Plazas of Triana for an early drink. Either at the rather grand terraces of the Hotel Madrid and the Gabinete Literario on Plaza Cairasco, or next door at the livlier Plaza de las Ranas. Or, head upstairs in the Monopol arcade for a sunset cocktail at the La Azotea de Benito.

Then it's over the road for outdoor tapas and drinks on Calle Mendizabal and Calle Pelota. For live music later on, head to The Paper Club.

For the love of craft beer

Craft beer lovers should head to Cervecería Te lo Dije Pérez in Vegueta (on Calle Ovispo Codina just down from the cathedral), or two one of the two craft beer bars in the Puerto district behind Las Canteras beach: Coriasso's Cervezeria on Los Martinez de Escobar, is a big, lively place with plenty of seats and a few outdoor tables, and The Situation is around the corner on Franchy Roca with a street terrace. Both have local brews like Jaira on tap as well as lots of other Spanish and Canarian craft beers.

If draft Guinness in the fresh air is your thing, then head to Paddy's Anchor on the beachfront.

For the love of tapas

For good tapas, just walk around and dive into any local bar that looks busy. On Thursdays, Vegueta is packed with students thanks to two euros drinks and tapas by the market. On Thursdays and Saturdays, the Mercado del Puerto also has popular tapas and live music nights.  Try the Mexican snacks at Ay Carmela on the south wall.

We have 1611 guests and no members online