What To See & Do In Las Palmas' Neighbourhoods 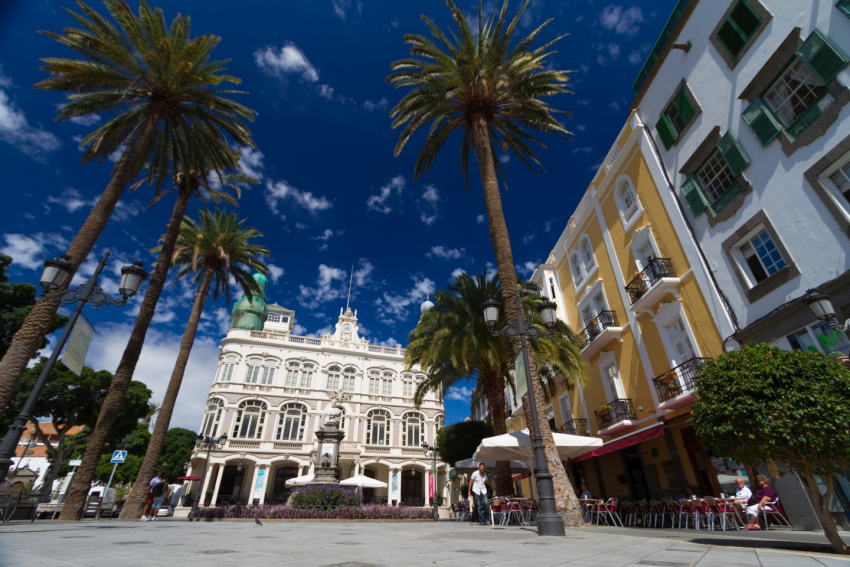 Triana Barrio is one of the most visited areas in Las Palmas de Gran Canaria city photosgrancanaria.com

Las Palmas city has over 400,000 inhabitants making it one of Spain's biggest cities. Here's the Gran Canaria Info guide to the city's main barrios and what to see and do in them.

What to do and see in Vegueta

When Columbus stopped at Las Palmas on his way to the Americas it had only existed for 12 years and little more than a fortified garrison surrounded by palm trees. It soon grew as Las Palmas became an important sugar port and stopover on the route to the Americas.

Vegueta's Santa Ana Cathedral first opened its doors in the 1570s but has been in continuous construction ever since. Gran Canaria went through several boom and bust periods as the sugar, wine and cochineal industries flourished and collapsed. When the money was rolling in, the cathedral and Vegueta got bigger and more ornate.

The barrio today is Las Palmas' main tourist attraction (along with Las Canteras beach). During the day, it's busy with coach tours and cafe life. At night, Vegueta is one of the city's tapas hotspots.

Highlights of Vegueta include the mummies of the Museo Canario, the modern art of the CAAM, and the old governor's mansion, known as the Casa de Colón. Don't miss tapas evening every Thursday.

As Vegueta grew, it ran out of room and spread north across the Guiniguada Valley to form Triana. The two historical barrios were once connected by bridges over a stream.

What to do and see in Triana

The southern fringe of Triana is almost as old as Vegueta but as you move north the wooden balconies give way to modernist facades and wrought iron balconies. Triana is still Old Town, but today it is far more vibrant during the day than Vegueta. It was the city's first commercial district and is still a busy shopping district.

Highlights include the fashion stores on Calle Mayor, and the smaller boutiques lining the cobbled lanes just up the hill.  There are plenty of restaurants in Triana, from the always-reliable Allende to the smart terrace of the Gabinete Literario.

Wander down the main street and do some shopping, then head south to the Plaza de Las Ranas and Plaza del Cairasco for a coffee and a spot of lunch.

What to do and see in San Cristobal

All of Las Palmas' fishermen bring their catch to San Cristobal as it's home to the city's fishing collective as well as several of it's most popular fish restaurants.

With a wave-battered sea wall and slightly shabby feel to many of the houses, San Cristobal still feels like a village even though it's been swallowed by the city. Think teeny-tiny Habana; San Cristobal even has a mini beach right next to its tiny harbour. In fact, the only things that aren't small about the

The only things that aren't small about the barrio are the weekend queues for seafood and offshore fort: You can walk out to the fort at low tide, but can't get inside. A bit like the restaurants on a Saturday afternoon.

Here's more info on why you should wander around San Cristobal.

Las Palmas' natural jewel with its three kilometres of golden sand and fringing lava reef. The beachfront promenade is lined with restaurants and the snorkelling here is world class. The north end of the beach is wide and clam with coconut trees while the south end is where all the surfers hang out. The area behind the beach is divided into different barrios each with its own character and highlights.

What to see and do in El Puerto

Once the La Luz port started up, Las Palmas inevitably spread north towards it. The result was that the empty sand dunes that separated La Isleta from the main island were built up in the 20th Century. The area is now called El Puerto but it's subdivided into several distinct barrios.

The southern end of Guanarteme, behind the surfy La Cicer end of the beach, is low rise and still feels local. The streets by the beach are full of surf schools and hostels, while the Plaza del Pilar is famous for its lively fiestas and local bars. Most of Guanarteme's restaurants and excellent tapas bars, are at its northern end, although Bom Gosto and Quebeque are exceptions.

Heading north, Guanarteme blends into Santa Catalina, with its palm-shaded plaza, and the heart of the El Puerto barrio at Playa Chica beach. It's a busy, mostly high rise area packed with shops and bars and also home to beachfront hotels like the Reina Isabel and NH Playa. The El Muelle shopping centre and Poema de Mar Aquarium are just behind Santa Catalina Square.

What to see and do in La Isleta

Las Palmas' northern barrio and one of the oldest as it was originally a fishing village that predates the modern city. Today, La Isleta still has a strong identity and lively local fiestas.

La Isleta is also the gateway to El Confital, the city's pristine surf spot and beach hangout. The seafront path that goes from Las Canteras to El Confital is the most approachable bit of La Isleta for visitors, although the streets between the sea and Calle El Faro still have some nice old houses. Calle La Naval is full of cheap shops selling everything from clothes to jewellery supplies.

What to see and do in Mesa y Lopez

This long shopping street almost traverses the city (and will one day when it is expanded all the way to Las Arenas shopping centre) and is home to the vast El Corte Inglés department store. For more on shopping in Las Palmas, see our complete guide.

Las Palmas' other urban beach, right in the heart of the port, gives its name to the surrounding barrio. Mostly low-rise, it includes the city's marina with some fantastic waterfront bars and restaurants. Take some bread because the fish are always hungry! The Estadio Insular park, inland of the marina, is fun because it's on the site of the city's old football stadium and many of its seats are still in place.

Las Palmas's garden city, home to some rather fancy mansions and the city's Anglican church, is a pleasant, low-rise zone for a wander. Head south to the Santa Catalina Hotel and Pueblo Canario square for a coffee surrounded by neo-Canarian architecture. Pop into the Nestor Museum to see the nightmareish paintings of fish and storms. Then, head into Parque Doramas and keep going up the hill for gorgeous views out over the whole area and the port.

The bit that fills in Las Palmas between the garden city and Triana. Arenales is named after the sand dunes that covered the area up until the 1960s. It's a residential and business are with plenty of local cafes.

We have 425 guests and no members online