Las Palmas: How The City's Attackers Paid With Their Lives 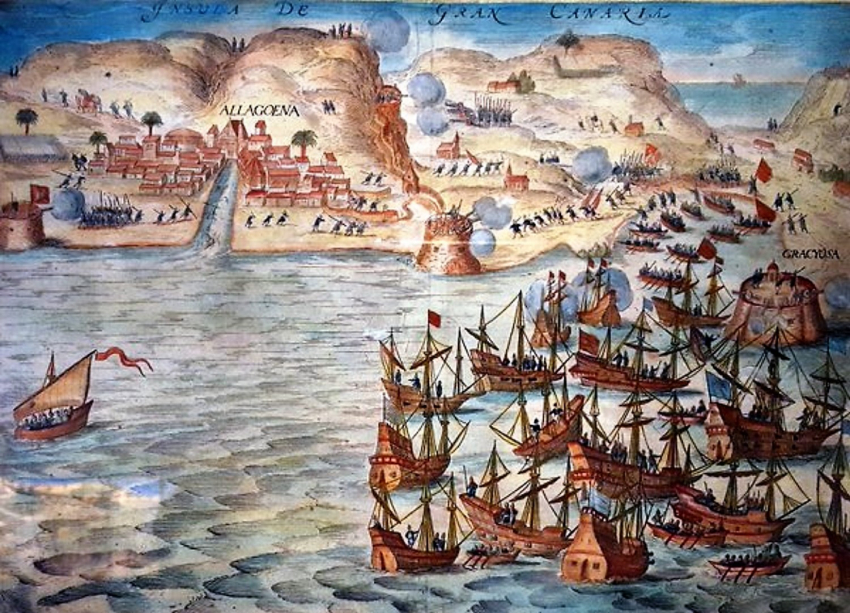 Las Palmas city's first 100 years of history were violent and bloody. And several of the city's most famous attackers shared grisly fates. The curse of Las Palmas sent them to early graves.

The modern history of Las Palmas started in 1478. A Spanish expeditionary force, led of course by a man called Juan,  built a wooden fort under some palm trees and called it El Real de Las Palmas.
Three days later, hundreds of aboriginal warriors surrounded the stockade. They hadn’t come for a chat. The Canarii knew enough about the Spanish to know that they had to fight them before they got established.
The pitched battle for the future of Gran Canaria happened on a plain just outside Vegueta (probably where the sewage plant is now) and lasted a whole day. Looking back, you might think that the conclusion was inevitable but on the day the Stone Age Canarii came close to defeating the Spanish. They were strong and skilful fighters and held their own against Spanish guns and steel.
It took a personal cavalry charge by Juan Rejon himself to drive them away and win the day. The day that the Spanish learned that horses and steel could defeat any enemy. The day that the Conquistador was born.
Within 5 years the Canarii had lost their island completely and just 14 years after the Battle of Las Palmas, an inept, slave-mongering navigator called Christopher Columbus accidentally bumped into the Americas. The conquistadores, their brutal battle tactics honed against the Canarii and the Guanches, had found their continent.
Columbus got the glory if not the riches from his discovery, but for Juan Rejon himself the future wasn't as rosy.
The Spanish spent the first few years bickering over control of Las Palmas and Gran Canaria island. Rejon was arrested in 1481 and sent back to Spain, only to be pardoned and put in charge of the conquest of La Palma and Tenerife. However, his fleet foundered in a storm and he was murdered by an old enemy when the survivors arrived in La Gomera.

Sir Francis Drake's last expedition was a disaster from start to finish. It started with a botched attack on Las Palmas city and finished with him buried at sea off Panama.
The debacle started with Drake's attack on Las Palmas. He expected to take the city within hours but was soundly beaten by the city's defenders. After three days he withdrew to the south of the island to take on water but his landing party were captured and sang like Canaries.
Drake's secret plan to surprise the rich Spanish cities of the Americas travelled ahead of him on a fast Spanish ship. By the time El Draque arrived, the Spanish Caribbean was fortified and expecting him. After a series of failed attacks he succumbed to dysentery and ended up on the seafloor in a lead coffin.

In 1599 a huge Dutch armada led by Admiral Pieter van der Does attacked and took Las Palmas in just two days. The quick victory went to the Admiral’s head and he decided to take the rest of Gran Canaria too.

So, he marched his tired men up into the hills behind the city to capture the rich sugar towns. However, his heavily armoured soldiers were no match for mobile local militias in the forested terrain.

Van der Does was ambushed, defeated and beat a hasty retreat to the city. He wasn’t the best of losers and turned Las Palmas into a bonfire.

Most of the city’s original houses, monasteries and convents were destroyed and only the stone cathedral survived unscathed.

It took Las Palmas 100 years to grow back to the size it was when Van der Does arrived.

The admiral didn't last anywhere near as long. From Las Palmas he copied Drake and withdrew to south Gran Canaria to recover. From there, he sailed to the Cape Verde islands where he and many of his men died of tropical diseases within days of arriving.

The curse of Las Palmas had struck again!