Own A Gran Canaria Timeshare? You Have To Read This 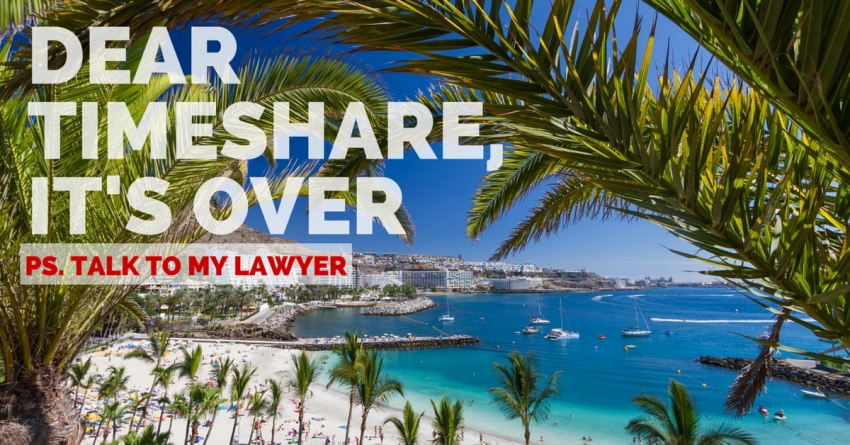 You can now recover your timeshare money through the Spanish courts www.photosgrancanaria.com

Gran Canaria timeshare owners with illegal contracts are finally getting their money back. Here's the story of how Spanish law caught up with timeshare. And how a Gran Canaria law firm made it happen.

Visit any of the Gran Canaria's timeshare resorts and everything seems peaceful. The hibiscus hedges bloom, owners lounge by the pool, and sales teams still walk the walk and talk the talk.

But behind the scenes, things aren't as calm. After losing an epic legal battle, timeshare is facing its demons. And paying for them.

The story of how timeshare broke the law, got away with it for years and finally had to face justice, started back in 1999.

It's no secret that the early days of timeshare were the Wild West. Big money sloshed around and ruthless sellers wanted it all.

And once the contract was signed, there was no way out.

Spanish law, written before timeshare even existed, was useless.

Spooked by the out-of-control industry and a wave of complaints, Spain passed a strict timeshare law in 1998. It came into effect on January 4, 1999.

The new law was clear about what timeshare could and couldn't do.

But in Gran Canaria, nobody took any notice.

Maybe timeshare companies didn't understand the law or assumed that their lawyers would always get them out of trouble. Or maybe they were just too greedy to give up their vast profits.

They kept on selling timeshare exactly the same way.

Only now, the contracts they signed were illegal.

All contracts signed on or after January 4, 1999, are bound by the timeshare law. Not just in Gran Canaria, but all over the Canary Islands and Spain.

Spanish law is slow but remorseless. The new law had to be tested in court. And of course, timeshare's formidable army of lawyers fought every case to the death.

The first cases that tested the 1998 law got nowhere. If timeshare lost, it just appealed to a higher court. Things got expensive and dragged on for years. Many owners gave up hope of getting out of their illegal contracts.

But in 2015, timeshare ran out of appeals. A Gran Canaria law firm finally got a test case in front of the Spanish Supreme Court, the highest in the land.

And Spain's top judges in no mood to listen to the timeshare industry. The court ruled in favour of the owner, annulled her contract, and forced Anfi del Mar to pay up.

Case after case reached the Supreme Court in 2015 and 2016. And timeshare kept losing.

The judgments set the precedent for all of Spain's courts to follow.

The battle was over, and timeshare had lost.

This isn't theoretical. Gran Canaria timeshare owners with illegal contracts are now getting their money back on a weekly basis.

The Supreme Court did more that support the 1998 law. It ruled that illegal timeshare contracts are null and void.

If a contract is declared illegal and void, the company has no choice but to return all the money it took.

It doesn't matter how long you've owned a timeshare. If a court declares your contract illegal and void, you get your money back.

The Supreme Court has now ruled on three vital points.

The Spanish Supreme Court ruled that all contracts containing floating weeks, including holiday clubs, etc,  are illegal and void.

The Supreme Court ruled that any timeshare contract signed in perpetuity after January 4, 1999, is illegal and void.

Deposits: The law made it illegal for timeshare companies to take a deposit for 14 days after signing a contract. Timeshare ignored the cooling off period. Or it cheated by getting buyers to use independent deposit holders.

Anyone who paid a deposit within 14 days of signing a timeshare contract has an illegal contract.

There's more: The Supreme Court ordered timeshare to return double the amount of any deposit taken during the cooling-off period. And, it extended the cooling off period to three months for illegal contracts.

If your timeshare contract contains floating weeks or is in perpetuity, and you paid any money within three months of signing, you are entitled to get all your money back, plus double the amount you paid in the cooling off period.

Your timeshare contract is illegal if it includes a floating week, indefinite period, or if you paid a deposit on signing. If you signed after January 4, 1999, you can get it annulled in court and get all your money back.

It sounds good, but I've heard it all before. Is this a(nother) scam?

We get it. After all, it isn't the first time that timeshare owners have been promised a solution.

But this time, it's the real deal. Spanish Supreme Court rulings are unappealable and timeshare has nowhere left to hide.

And it knows it. That's why it's paying up.

I want to get out of my timeshare contract. What do I do?

You have to go to court and prove that your timeshare contract contains an illegal clause. Then, the court applies the relevant Supreme Court ruling and declares it void.

You'll need a good lawyer and one with plenty of experience of timeshare cases.

Why? Because timeshare lawyers can still get cases thrown out of court on technicalities. And Spanish court rules are strict. A missing paper or an untranslated document can delay a whole case for months.

With the law so heavily on your side, there's no need to take the risk.

You need a lawyer with a track record of winning timeshare cases.

The CLA is the law firm that took on timeshare and won. It spent seven years fighting through the Spanish court system until it got to the Supreme Court. And it won.

The CLA has over 800 cases in the courts and is winning them every week.

Not just in Gran Canaria, but in Tenerife and the rest of Spain. The law is the same everywhere.

This track record of success is why the CLA is the best option for all Spanish timeshare owners who want to get out of their illegal contract and get their money back.

We're proud that is was a Gran Canaria company that took on timeshare and won.

If you have an illegal timeshare contract, contact the CLA now and start the process of getting your money back. Fill in this quick form and they'll be in touch within 24 hours.

The Tragic Irony Of Anfi's Decade Of Madness

We have 521 guests and no members online