11 Things You Never Knew About Bananas 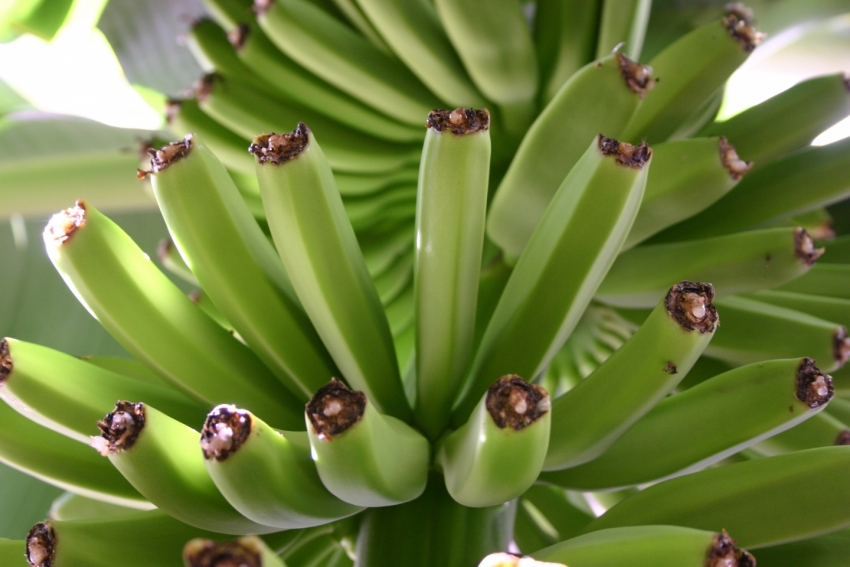 Bananas don't grow on trees and won't exist in 20 years. The plants hate growing alone and wander about in their fields. Here are ten surprising facts about the happy yellow fruit that you never knew. Watch the video right to the end for the talking banana.

There's no such thing as a banana tree as banana plants are actually the tallest herb in the world; Their 'trunks', just long leaf stalks wrapped around each other, can be nine metres tall. Since the plants are herbs, the fruits are technically berries.

You can chop a banana plant down at the base with one swipe of a machete because the main stem is actually soft.

Banana plants get sunburn and hate being lonely

Banana plant stems and flowers get sunburned easily and need shade during the midday sun. Luckily their big leaves act like parasols and create their own shade. That's why banana plants grow best in big groups as they shade each other. If you want to grow banana plants at home, you need plenty of space so that you grow a clump rather than just one plant.

That's a hand, not a bunch

Bananas were first grown in Papua New Guinea and spread to Madagascar and Africa thousands of years ago. The arrived in the Middle East and Europe thanks to the spread of Islam. While we think of bananas growing in the Caribbean, they are newcomers to the region and were probably growing in the Canary Islands before hey reached the Americas. The oldest known British banana was discovered in a Tudor rubbish dump in 1999.

Cultivated bananas never produce seeds so you have to grow them from the suckers that grow at the base of each plant.

Because you can't tell a banana plant where to produce its next sucker, you can't grow them in rows. You can plant them in rows, but they move around over time as the stems die and new suckers grow. The older the banana plantation, the more higgledy-piggledy the plants.

Each banana plant only produces one bunch of bananas

Bananas start life pointing downwards. As they grow and ripen they turn towards the sky and by the time they ripen, the tips are pointing upwards.

Most bananas don't taste great because they hate the cold

As soon as you refrigerate a banana, the enzymes that turn starch into sugar stop working properly. Once they warm up again, the fruit ripens and goes yellow but it's never as sweet as a fruit that hasn't been chilled. All bananas sold in Europe, and most supermarket bananas in the Canary Islands, have been chilled.

To taste a banana at it's best, buy a bunch from small local shops in Gran Canaria. They get their fruit directly from the grower so they are never put in a fridge. Put a hand on a sunny windowsill and wait until the peel goes bright yellow and develops a few little black spots before eating them. You'll never taste a better banana.

The banana is doomed

A fungus called Panama disease is wiping out the most common type of banana plant called a Cavendish, in Asia and is expected to spread around the world. Because banana plants don't produce seeds they are genetically very similar and all die if they get Panama disease. There's no sign of it in the Canary Islands yet but experts think that the banana as we know it. Enjoy them while you can.

You can eat more than the fruit

Half of the bananas grown around the world are plantains and never get sweet. Instead, they are cooked and eaten like potatoes, or made into beer. Banana leafs are used as natural plates all over Asia and as a wrap to steam food in Asia and South America. In Asia the inside of the big pink flower at the bottom of a bunch of bananas is chopped up and used as a vegetable and in Burma, they even curry the heart of the banana plant stem. Banana leaf and stem fibres are used to make fibre for cloth in Japan and for basket and rope weaving in Africa. In the Canary Islands, fresh banana leaves are fed to cows and goats and the dried leaves are used as stable bedding.

In the Canary Islands, we even make bananas into wine.

We have 455 guests and no members online