Lion in the Maspalomas dunes

Published on April 1st 2016: The first Gran Canaria Lions were released back into the Maspalomas dunes nature reserve this morning after an 80-year absence.

The Gran Canaria lion disappeared from the wild in the 1920s but a small number survived in captivity in Uruguay thanks to a travelling circus run by famous Big Top Magnate C. López, famous in the Latin world for its extravagant, bizarre circus shows. 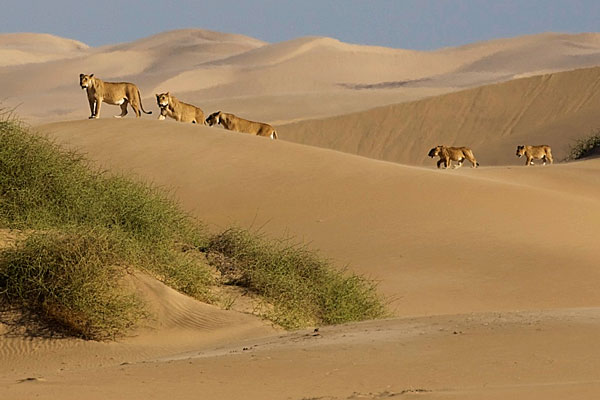 These lions, thanks to decades of negotiations and diplomacy, have now come home and were released into the dunes after radio tagging. It's why areas of the dunes have recently been fenced off. The lions, four females and a male called Aslan, are expected to adapt well to their new home thanks to an ample supply of food.

The reintroduction of the Gran Canaria lion has not been universally popular and a group led by Camel Safari owners and the Federation of Local Hotel Owners has opposed the release. Famous local naturalist Juan Montesdeoca said yesterday that the protests were misguided because "more tourists will come to look at the lions than will run away from them".

However, because Gran Canaria lions mostly eat fish, conservationists are sure that they will not disturb sunbathers in the dunes. They have warned nudists not to take tuna sandwiches to Maspalomas beach for the time being, "just to be sure".

Lion reintroduction is the first stage in the Canarian Government's plan to return the Maspalomas dunes to their original state. Within five years it hopes to have herds of Canarian camels (still alive in the wild in Fuerteventura), the Canarian ostrich and the world's only terrestrial tuna fish back in their natural habitat.